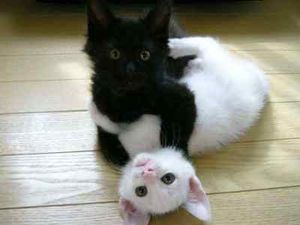 The original Were-Panther was born of a were-wolf and a lioness, both of whom where quite surprised to find their offspring a were-panther since neither of them were. Upon finding out his young was neither were-wolf or lion, his father the were-wolf accused the lioness of cheating on him. That prompted her to eat him. So he was raised by the Lion pride until kicked out for being a panther instead of a Lion, he searched the land until finding an oasis in a desert beyond the mountains. Once in the oasis, the were-panther was then imprisoned by a horny sorceress into a life of sexual slave-dom. The Were-Panther II's were the children of their unholy union and now wander the land on missions for their mother the evil sorceress.

The ability to change from Panther to human and back again.