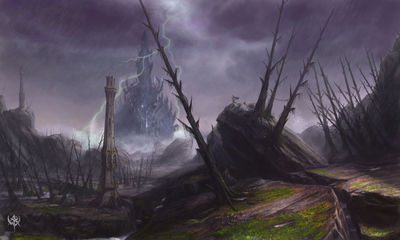 You can see the towers used to guard the GA. The building there is just for effect.

A hero's worst nightmare, the Wastelands of Insomnia is a deadly area just outside Godville.

The land is barren, dark, and almost lifeless. It is said that no matter how hard you try, you will never sleep in this place. The cries of ghosts, screams of heroes being tortured, and the constant attacks of monsters keep any mortal from sleeping.

Rumor has it that this place became stripped of life when they locked an immensely strong psychotic Godville Administrator in this area. He tore the place up in an attempt to get out but eventually died of exhaustion. Ever since then, his ghost has been seen roaming the area, still attacking nonexistent objects.

Others say demons created it for the damned. We shall never know.

The ground is a purplish hue, the sky is red, and the trees are lifeless and black. Large rocks are everywhere, monsters are faster since they have mental problems here, and, like the Sleepless Hollow, heroes must always be on guard. May your hero come out of this place alive and sane. If not...

The Wastelands are located at around the 41st milestone.