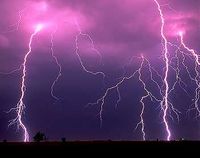 In the beginning, there was nothing but darkness and chaos. The universe was in a continuous state of turmoil and disorganization. The Divine Being

RogueSaber  (U • C • T)  looked upon this conglomeration, smiled wryly and began discharging luminous violet-hued bolts of lightning into the fray. The infusion of several million volts of electrical destruction resulted in several simultaneous manifestations:

Lastly, one solitary female raised a broken branch toward the skies and demanded that RogueSaber stop his cruelty. Even after multiple direct strikes to her head and only a twig remaining of her makeshift weapon, this lone crusader continued to defy RogueSaber. As such, RogueSaber began to admire Tahiri's persistence and bravery (or stupidity since they are sometimes confused). He ceased his barrage and completely healed her. Tahiri was so thankful (and relieved) that she laid down her remaining splinter of a weapon and paid homage to him. He, in turn, made her his Champion.

For many years, RogueSaber trained Tahiri to be a Champion of his causes. She was trained in reading and writing, speaking coherently, the art of battles and fighting, strategies, making friends and influencing people, taming wild animals, alchemy, elixirs, magic (both white and black), blacksmithing, construction, astrology and survival. Against his normal nature; RogueSaber used kindness, praise, rewards and even a sticker chart to help nurture Tahiri towards becoming a first-rate Champion.

After 10 years, RogueSaber finally admitted defeat and gave up on the impossible. The only things Tahiri was able to comprehend were:

Still, RogueSaber admired Tahiri's tenacity and unwavering efforts to appease her god. As a final effort to turn Tahiri into a worthy Champion, RogueSaber sent her to Godville under the premise of bounty hunting. After arriving and hearing Tahiri complain for the dozenth time, RogueSaber had had enough and struck her down with lightning. Oddly enough, after regaining consciousness, Tahiri began to excel as a Champion worthy of her god. She began fighting better, she became stronger and wiser, she began keeping a journal of her deeds (with correct spelling and punctuation), she began making friends and winning people's admiration, and most importantly, she began taking baths (instead of waiting until it rained) and even using soap.

After Tahiri began to progress more towards becoming a true Champion, she sacrificed a Dust bunny to RogueSaber and asked that she be allowed to remain in Godville. It seems the citizens had become fond of Tahiri since she was clearing the nearby lands of monsters and outlaws. The citizens felt safer with her around and begged her to never leave. Tahiri, in return, began to feel a closeness with the townspeople and wished to stay. In return, she decreed that she would build a temple out of gold bricks in order to show her undying allegiance and to properly worship him.

Truth be told, RogueSaber had originally decided to allow Tahiri to remain in Godville when he sent her there. (The total truth is that he was going to abandon the imbecile there and never return.) However, once he realized that punishment helps her to become a worthwhile Champion, he decided to stick around and see how great of a Champion he could create. It is a win-win situation: RogueSaber enjoys target practice with lightning bolts and Tahiri becomes a better Champion with every "bullseye". He is also looking forward to a golden temple in his name.

In addition, RogueSaber created the Mandalorian Guild in order for Tahiri to have someplace to call home. The guild is also a place for her to recruit other warriors. The fate of Tahiri is still debatable and up for discussion, but for now RogueSaber is satisfied with her progress.

Random Thoughts of a Deity

Even gods get bored at times and let their minds wander unrestricted. RogueSaber is no exception to this phenomenon. Here are some of his random thought during times of boredom:

Talking to a Deity