Difference between revisions of "User:Karot Dave"

A player from the online ZPG (Zero Player Game) browser based game “Godville”.

HERO Name: Ser Umpsalot (was “Ser Dumpsalot”, was changed for being inappropriate.)

Personal Sigil: A Golden Carrot on a Red Background With “DAVE” Written in Gold Under it.

The Cronicles of Ser Umpsalot and His God, Karot Dave: Chapter 1, “The Expedition”

On a stormy day, A young woman, Lianna, was asked to go find the town mayors brother, though there was a storm, and the towns folk told her that it could be some other day, she set sail looking for the mayors brother anyway. She was never heard of again from towns folk...

Lianna did not drown, though for some reason she was the only person left on her ship when it had passed the storm. How odd... Anyway she saw an island not too far off and planned a corse, but a pretty hard time making the ship go there. It was only because the waves and wind were on her side, that she made it to the island. She could have sworn she saw snakes in the ocean...

After she landed on the island she instantly found a small village, and after moments, found who she was looking for. The mayors brother, John, He told her that he knew she would come and that he wasn’t leaving anytime soon for this new place was like paradise to him. But he would go on an expedition with her to kill a sea serpent that had been destroying the village ports, without them, they would collect less fish, therefore more hungry people, therefore more fighting, therefore no more paradise.

When Liana woke, she was tied to a plank, THE plank, John:” Well, I see the little bird has finally woken up,” Lianna: “What are you doing?! Cut me loose!” John:”HA! Has that ever worked out for you? You should feel greatful! I’m offering you a deal, you see, I was supposed to become the mayor but instead, I was said to be a criminal and was tossed in jail, I escaped and came here, as new ruler of this world. Now you know why I can’t just let you go, so here’s my deal, all the woman here are ugly, marry me, and I’ll let you rule with me.” Liana:”Hmm... that does seem like a good deal, but I’m not much good at leading, hence my missing crew,,,” John:”Then you can just leave that to me, do you except?” Liana:”... yes, I do,” John:”then I’ll cut you loose, but you’ll have to stay in your shackles just in case your lying” Liana:”I understand” John frees Liana. Liana:”I guess we will be bound for life...” John:”Yes, we can rule together as king and queen!” Liana: Sigh...”I see. Good bye...” John: “ wait wha...” Lianna pushes John and herself off the bout into the whirlpool... All the noise that can be heard is John screaming, and then the sound of waves... 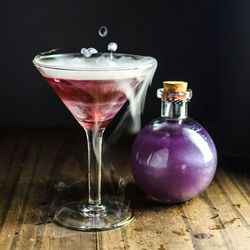