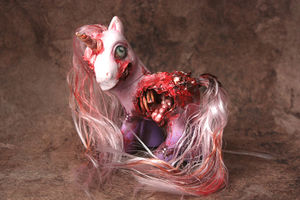 Undead monsters are Special monsters that have been defeated by your heroine and yet, need to be defeated once more.

Monsters are likely to raise from the dead when there is either a specific Daily Forecast or during Halloween events.

Undead monsters are powerful, and killing one at Halloween might give the hero a chance to yield two artifacts instead of only one.

On account of the Undead Monsters being on the tougher side these artifacts are likely to be more sought after (such as being wanted in the Godville Times), or more expensive items.

The hero's reward for defeating an Undead Monster could include, but are not limited to, things like a bold artifact, an activatable artifact, or even a golden pumpkin.