Travis The Adorable was born somewhere to someone, most likely in Godville. He doesn’t really know because he grew up in the Westerfluffin Home For Easily Abandoned Children.

As a child Travis was regularly picked on by the other children in the orphanage, mostly because of his boyish good looks and his insufferable clumsiness. Although many perspective parents would instantly be drawn to the precious boy, they soon wondered if he had been cursed by a witch when he would end up tripping and impaling them with a crayon and setting fire to their hair with a simple static electric shock. Although his bad luck didn't always end up causing injury Travis was generally isolated for the safety of those around him.

Without any close friends Travis would spend each day by himself play-fighting with a scarecrow behind the orphanage, usually losing every battle. There he would imagine he was a powerful warrior, dreaming of great adventures and the quest for treasure. Other children did occasionally come by to mock him, but they were soon scared away when the boy would attempt to impress them and inevitably cause a chain reaction leading to an explosion.

Travis’ only other comfort in the world was praying to the God Abyboi, who would occasionally send him messages in his soup or in the stains of his bed sheets. Although he was visited by psychiatrists and exorcised by nearly a dozen priests, Travis knew deep in his heart that his God was real. He was frequently reminded of his God’s love, especially when he had drank too much water before bedtime.

On his 17th birthday Travis decided that he had had enough of life in the orphanage. He attempted to take one final bath before leaving, but instead succeeded in flooding the basement and causing the entire orphanage to sink awkwardly to one side. He quickly grabbed his diary and ran from the building, waving goodbye to a sea of angry faces.

Not accustomed to the challenges of fighting real monsters, Travis quickly learned to use his adorable looks to lull creatures into a false sense of security before clumsily destroying them. His signature puppy-dog-eyes then punch-to-the-groin technique has proven exceedingly effective in incapacitating his enemies. Trying to do something nice for them also works in Travis’ favor by completely failing. 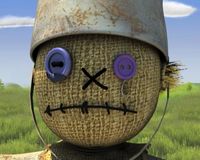 Although no one has ever seemed to miss him, Travis still sends the occasional postcard to the orphanage updating them on his crazy journey to the ends of Godville. His messages have proven hard to decipher though, as his inspiration to write usually occurs in the middle of his wild pub visits. Luckily he also includes crude sketches to detail his most proud battles.

Travis doesn't know it, but the only person that seems to miss him at his old home is actually his old sparring partner the scarecrow, which has lost most of his straw filling since he left and now just stares vacantly at the ground everyday where they both once played. Luckily the trash bins are nearby, and Travis’ postcards usually fall to where he can read them.