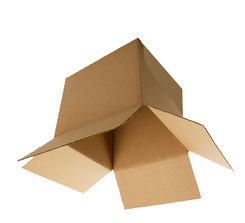 The transmogrifier is an activatable artifact capable of turning one or more bold artifacts in a hero's inventory into one or more gold bricks.

The transmogrifier was invented by Calvin and his best friend Hobbes. Originally, the transmogrifier could turn its contents into any number items including an eel, baboon, bug, dinosaur, boy, tiger, toad, frog, worm, or a bowl of chowder. On 2 g.e., the Machina Corporation in the town of Tradeburg purchased the exclusive distribution and patent rights to the transmogrifier from Calvin. The Corporation quickly modified it to turn any bold artifact into a golden brick. According to the lead engineer, it took tireless nights and a few 120 hour work weeks. Upon further reflection, it appears as though the engineer just took a black sharpie to cross out the various output options and just wrote "golden brick" in the blank spot. Estimated work time was seven minutes. In any case, the Machina Corporation now produces many transmogrifier devices daily. After production, transmogrifiers are sold to monsters. Heroes often come into possession of transmogrifiers by defeating those monsters.

As with any artifact, heroes have been known to give away a transmogrifier to another hero as a gift.