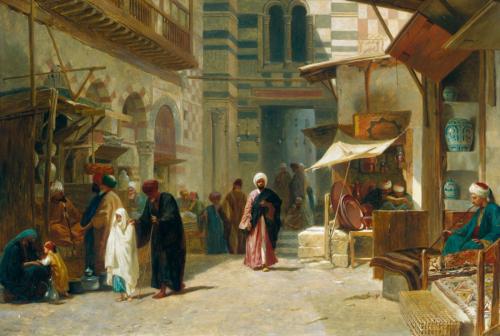 Overlooked by the Jagged Peaks, the land is relatively flat due to the many landslides that usually occur at the height of summer every few years. The Pathway of lemmings passes close by before finishing over a cliff. It is often very windy here due to Tradeburg's proximity to the ocean but the advantages of trade outweigh this trivial factor. The buildings here are never taller then two stories which is helpful since the town layout is a bit of a mess with every free plot of land taken up by a multitude of tents.

Tradeburg is the only city without a mayor or any form of government authority. This is mostly due to it being a market based town. It is also known to be the only one without buildings taller than two stories high. It is one of the two cities that has a harbor for trading overseas, the other being Trollbridge. Tradeburg never has less than 10,000 people in any given day. A huge market square can be seen in the middle of the city. This is where most of the trading takes place. In the market, there is each and every single object you can imagine. It contains nearly every Artifact or piece of Equipment ever made. Heroes can find plenty of armor suitable for them in here. Because of that, prices are usually a bit high. Hence, Tradeburg has the best economic state in all the land. Because of this, robbers and pickpockets come in large numbers. It is not advised to go through Tradeburg unarmed.