Who we are and what we do

The Guild was born out of a pool of anarchy, a slime pit of despair. Amide tumbulous waves that threatened to swamp it in it's beginning, amide thunder of gods, angered at the end of their rule and the beginning of order. The very flames of hell quaked and were said to... Who am I kidding? This is just The Guild! Created one day when someone said "Founding a guild would be cool. But what would I call the guild?" That doesn't mean we can't rave on about the seven levels of hell and the various abysses of endless torture containing the nightmares of man, waiting for the day when they can drag their terrible pustulated flesh into the daylight and reap revenge on man, though! 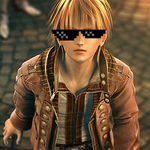