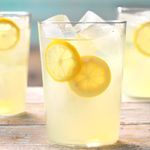 Hell hath no fury, nor visitors. For obvious reasons this subterranean dimension is not the first choice for tourists. But every once in a while some reckless human decides to pay a visit to the underworld; sometimes they bring swords, jewelry, capes... Loress Dram brought a sack of lemons. Yes, really.

When a bunch of devils ambushed him, they saw dozens of lemons pour from his huge sack. The lemons were left there to rot by the demons. But life always finds a way and these lemons evolved to survive in hell, their juice sweet as honey but their thorns the size of a claymore (they became arbusts). This fruit was useless to devils, but appreciated by humans in the form of lemonade.

Thus demonade was invented. Small weak demons banded together to start brewing exotic evil lemonade to be sold on the surface.