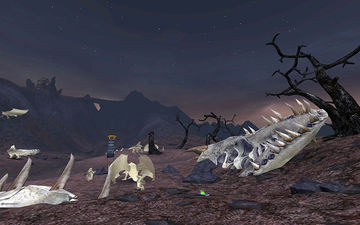 The Wasteland (or Swamp) of Missed Kamikazes is a dry, rocky, barren stretch of land. The only vegetation is a few ancient trees scorched by dragon fire. Many dragon bones can be seen sticking out of the ground and many more are thought to be hidden beneath the surface. Many carnivorous and canine monsters can be found here munching on dragon bones so it is a good place for finding sundogs

The Wasteland is situated in the southern desert near Los Demonos.