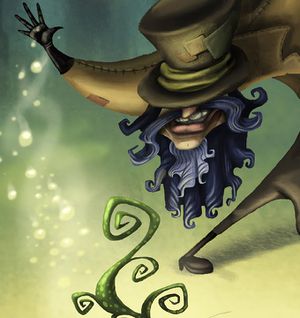 Making a plant grow in the blink of a eye.

Street magic was first performed by people brought to Godville at the start of everything. As their God wouldn't help them, they started doing weird and unheard of things out of nowhere!

Nowadays, growing up in the streets of an urbanised city- there are some things you can only learn by others. Not anyone (nor any book) can teach you the provided skill of 'Street Magic'. Whether it be throwing any amount of telekinetic knives with your psychically-enhanced mind- or getting this weird cloaked guy (called Kane) to let that 'little girl' finish her speeches? One of the most popular tricks was pulling a Dust Bunny from anyone's Egg-Carton body armour, that alone will do damage to anyone's self-esteem.

These things will become very natural as you adapt to your surroundings and have to think fast on your feet. This is useful for combat situations and in Godville streets.

Pull your finger off and re-attach it.

Send a sharp playing card into an arrogant Defender's head for a terrible gash on the forehead.

Make a bird appear out of nowhere to peck your opponent's eyes out for hp...

Place yourself in a large box, stab it with 1,000 swords and then turn out the lights! Open to reveal your opponent is now stone-cold dead in the box.