Difference between revisions of "Steel Rat"

The Steel Rat (Rattus Ferro) is a mechanical monster that terrorizes blacksmiths, marketplaces, and steel mills by being a common pest that a conventional mousetrap cannot kill. They can be either four-legged with a calligraphic symbol on their side, or look like they came straight from a sci-fi horror film and have tank treads instead of legs. The identity of whoever built these metal annoyances is unknown, but there are many bounties placed on whoever built them.

Steel Rats are built and designed to behave like their living/organic counterparts, so its impossible to tell if a steel rat is living inside of your house unless you hear the faint sound of tank-treads (Some of them have tank treads instead of feet) going across your floor at night or you hear a loud clang if you set a mousetrap. Since mousetraps can't "kill" the Steel Rat, if you catch one, act carefully because one wrong move can set the tiny robot free and back to being the unwanted guest. It is advised that after the robotic rodent is captured, take it somewhere that specializes in robotics to have the robot reprogrammed so that it can become a toy for a hero's pet, or a drone that can be used for espionage. 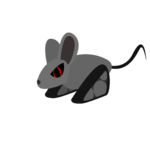 A Steel Rat with tank treads

Heroes sometimes train their pets to capture these mechanical menaces or even chase them on their own. The results of this are varied, but training a pet to chase the Steel Rats has a higher success rate than chasing them alone. However, since they are made of ferritic stainless steel, the Steel Rats are magnetic. Therefore, using a magnet or something else that is magnetic has proven to make catching these robotic monsters much easier.

If the robot is left alone, it will continue to live at whatever building it intruded and eat food to use as fuel for its battery. However, this can lead to multiple Steel Rats moving in and creating a Steel Rat infestation.