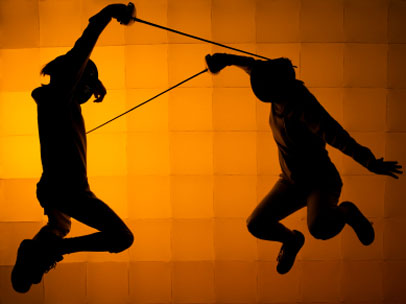 Sparring fights are similar to normal duels, but only take place between friends. Strangely enough, these duels are staged purely in the imagination of the two participating heroes so nobody is hurt (much) in these friendly fights and no duel records are affected making these fights very useful if a hero needs to gain some experience quickly without the risk of dropping down a few places in the pantheon. The effort needed to forge the telepathic link with another hero means that to participate, a hero must be level 7.

When the fight begins, both heroes have their health set to the maximum health of the lower leveled hero and the attacking power of both heroes is also set to that of the lower leveled hero. However, during the fight, the higher leveled hero can use the encourage influence or voice commands to heal to their actual maximum health. Once the fight is over, the heroes will return to questing and their health returns to whatever it was before the sparring fight began. Unlike fights in the arena and skirmishes, the winner of a spar will not gain the loser's gold coins and inventory. However, the winner will gain one percentage point of experience.

To commence a sparring fight, click the "Sparring Fight" button on the Remote screen in the app or the "Challenge Friend" link in the Remote Control on the website. This will cause the hero to sit down and start transmitting telepathic signals to the selected friend from the drop-down list. To do this though, a God must give up 50% Godpower.

When a god initiates a spar, their hero will drop everything and go into a trance while waiting for the other party to respond. This includes all forms of quests, healing at town, selling off loot, shopping, praying or fighting a monster. Likewise, when the friend accepts the spar invite they will drop everything they are doing immediately. If the friend doesn't respond to the challenge within the next five minutes, the hero will gain some experience from his mental exercises anyway then go back to questing, so make sure you only challenge a friend when they are online and chatting with you via private messages or something because otherwise a god has just wasted godpower. A message will automatically show up in the private chat between the involved gods informing them that the attempt to spar has timed out.