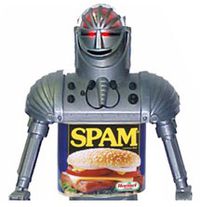 Fueled by a Thorium Spam Battery

The Spambot is the monster of the 21st Century: lean, mean and full of wires.

It came with the GodWeb, the internet for all gods. But some unqualified god-wannabes, filled with revenge, wanted to take over and possibly destroy the GodWeb. The group of anti-Webinaries built special programs, then coaxed their Godly friends to install these programs onto the GodWeb. They were the very first Spambots.

The heros populating GodWeb first saw a bundle of wires shouting gibberish without a license. The heroes told it to leave and it worked. Or so they thought it came back but they told it to leave again. The hero yelled at it so much it left. Only to come back so the heroes resolved to slay these annoying creatures who even the most evil gods pormoted their deaths.