Difference between revisions of "Skeatseria Lodge" 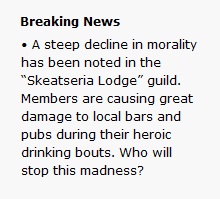 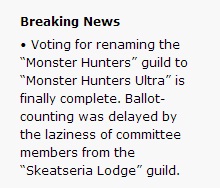 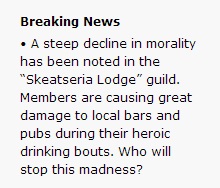 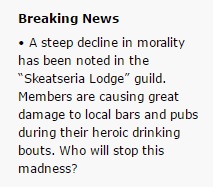 Skeatseria Lodge making the Guild Spotlight in Godville Times on Day 3096 g.e. (10/30/18) due to our ranking in the Pantheon of Adventure

Skeatseria Lodge making the Guild Spotlight in Godville Times on Day 3121 g.e. (11/24/18) due to our ranking in the Pantheon of Popularity

Below is the list of all Skeatseria Lodge members who have collected 1,000 pairs for their ark. They are listed chronologically along with the hero's level, age, and guild rank at time of completion.

Below is the list of all Skeatseria Lodge members who have awakened bosses. They are listed chronologically along with the boss’ name and power, hero's level, age, and guild rank at time of completion.

Below is the list of all Skeatseria Lodge members who have saved 30,000,000 coins to retire and open up shop in Godville. They are listed chronologically along with their store’s name, the hero's level, age, and guild rank at time of completion.