Difference between revisions of "Silent Knight" 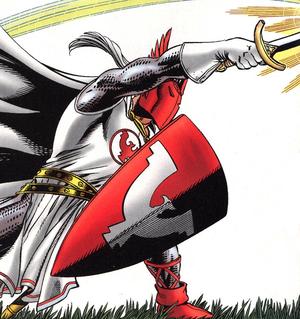 An illustration of a Silent Knight drawn by passing tourists

A Silent Knight is a member of a brash order of knights whose arrogance and constant boasting was legendary. One day, the order met around their famed Hexagonal Table when one of the knights boasted that he had been sleeping with the High Wizard's daughter. Unfortunately, the High Wizard just happened to be in ear-shot and cursed the entire order and all their descendants to forever exist in a cone of silence so that no one would have to suffer their infernal boasting.

Devastated by the fact that they would forever be unable to regale the populace with their heroic deeds, the knights of the order became bitter and cruel. Their members now roam the countryside in search of victims who they endeavor to doom to an eternity of silence through the veil of death.