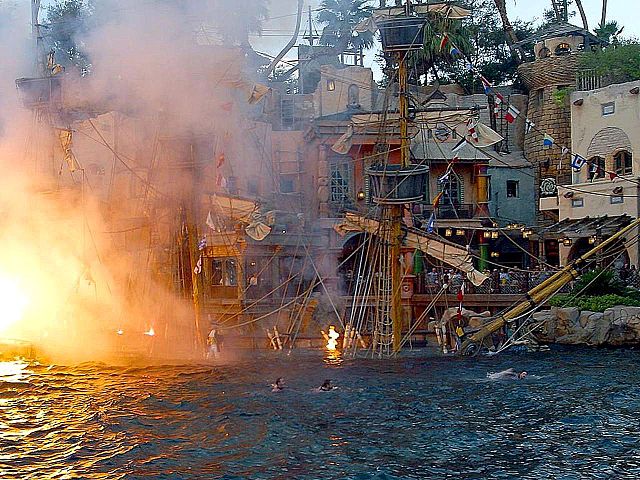 Ahoy gods and goddess! The wait is over. From now on, a hero with an ark can go on a sea voyage.

Using a shiny new button in the Remote Control (requires 50% of godpower) a god can teleport his soon to be captain to the Godville’s port, to search for a party of fellow sailors. Once the group of 3 or 4 heroes is assembled, it can break through the port’s authorities and head out into open sea for an expedition. Otherwise, they will just get back to their usual town business.

A god can watch over his hero from the comfort of his cloud by the means of the colorful map. It has lots of interesting and sometimes bit obscure things, but holding a finger over a map tile (or hovering the mouse over you’re a PC-god) will help to make sense out of it.

Arks need supplies and the initial stock will get them going for the first 40 turns. More food can be found in the wild, but keep in mind that the ark can’t make more than 100 moves – the tugboats patrolling the area will be forcefully rescued the ark and the hero.

The heroes are sailing by themselves using their basic navigation skills, but as usual, they won’t mind some help. Unlike dungeons, gods need not type voices – just a tap on a map tile next to the ark will send a navigation command (takes 5% godpower). Btw, godvoices do nothing other than appearing in the sail log.

Influences, however, work. Encourages can patch up the ark, while punishes can stun some fish (replenishing supplies) or enemy. Miracles useful in navigation and have no use in battles.

Unlike dungeons, where a group explores it as one party, in sail everyone’s for themselves, which could be harder for AFKs. The sea is tough, so if an ark goes down the true captain will go with it, which inevitably kill him. While a hero has some intelligence to avoid reefs or danger on a barely floating ark, the chances to succeed will be MUCH higher with at least minimal divine intervention.

In the beginning, it might feel that sails require lots of godpower. Don’t be afraid. Practice makes it perfect – after a few sails you’ll learn how to navigate much more efficently. Godville statisticians assure that just 50% of godpower in the hands of a savvy sailor will make a chances of getting a booty more than 50%.

The sea has islands ready to be explored, with reefs around them. Reefs are dangerous but sailable. Bigger islands are more likely to have something, but it takes longer to explore them. Island goodies could be ark repair materials, food, godpower restoring shrines, booty hints or the treasure itself. Sometimes it’s obvious what an island has, sometimes not (but the main treasure could be on any island regardless of its type).

There are 3 types of booty hints:

Keep in mind that hints never point at the already taken booty.

Distance hints (hovering over any of the hints will give you this text):

The sea has its own inhabitants – beasties. They can wait quietly or swim around searching for prey. The farther from the port the stronger these creatures are (and more likely they have something on them – food, a hint, etc). A beastie can be attacked by one or multiple arks by navigating into her tile.

Btw, navigation into a tile occupied by other ark will start a pirate fight. The winner will get a chance to plunder, while the loser will surely go to feed fish – unless he manages to escape beforehand, by navigating his ark away from the enemy. Here is where these extra wood logs will come in handy – the arks with few layers of sheeting have more HP to spare.

An important note: all moves within a turn are in random order, which leads to quite interesting behavior. For example, if two arks are next to each other, one can engage the other in a fight or keep chasing it (depending on who will happen to move first within this turn). Also, unlike boss-fights on land, divine influences in the sea have no priority: a beastie with a lucky roll of initiative can sink the ark, not giving a god a chance to influence within same turn. Yes, the sea is insidious.

Seas are full of booty. And what booty is the most valuable for the arked heroes? A creature worth of being saved in the ark. Some are on islands (manimals like to hangout there), some are among beasties (fenimals). They always has something to pay for their ride.

Another booty is more piraty one – a solid pile of doubloons or a very expensive activatable outlandish thing, which can be sold as it is (traders love them) or can be opened to check what’s inside.

Each sail has at least 5 booty spots. Keep in mind that just finding it is not enough – the hero needs to get to the port (or map edge) to keep loot.

And of course there is new achievement for the lucky ones who return with a booty.

There are few ways to end a sail:

The seas are full of choices and randomness. Like in dungeons, the gods could employ different strategies depending on situation. One can explore, pirate, influence or just leave it all to the hero.

That was quite a long read, matey. Are you ready for some yo-ho-ho and booty?