Sailing is a treacherous but rewarding occupation performed by heroes who have completed their arks. It involves sailing out into the vast and unexplored waters off the coast of godville, riddled with islands, monsters, reefs, and what the heroes seek, treasure. Tugboats regularly patrol wherever heroes sail, for health and safety reasons (allowing a hero to pilot any vehicle is a health and safety nightmare in itself), so that heroes who bite off more than they can chew can be rescued. However many heroes still die at sea due to hitting one too many reefs or angering a monster they couldn't beat.

Heroes can be sent to sail for the cost of 50 godpower using the "set sail" button on the remote control. Heroes will only set sail in groups of 3 or 4, and will simply pray to restore the gods spent godpower and return to their regular heroing duties if unable to find partners to sail with within 10 minutes. When this happens, there will be a 1 hour cool down until they can try to sail again.

The map of the sea is made up of a hexagonal grid with each cell coloured and sometimes containing a symbol to show its meaning. It provides not only vital information, but the main means of navigation. The cells surrounding the ark can be tapped to make the hero sail in that direction for a the price of 5 godpower. By long pressing a symbol on mobile or hovering the mouse over it on desktop, the meaning of a symbol will be displayed.

Meanings of symbols along with additional info are provided here, descriptions are given since some symbols may not show up on the wiki or may appear differently depending on the device being used.

Every turn, the hero will consume 1 supply, and will call for a tugboat if they run out. Arks start the voyage with 40 supplies, but can obtain more. If the voyage lasts over 100 turns, tugboats will assume the hero is lost, and drag heroes back to shore.

Heroes will sail by themselves, with a liking for exploring islands and fighting beasties and enough common sense to avoid danger if their ark is close to sinking, but their gods can influence them in the following ways to help them along:

Encourages will usually increase the ark's health, but like in the arena can backfire, which results in a loss of supplies.

Punishes will increase supplies or harm an opponent if the hero is in a sea battle. (see below) It can backfire, however, damaging the ark.

Miracles can either produce the effect of a lighthouse, add some points of interest to the map, or increase the chance of the hero finding something on the next island they visit.

Navigation commands, sent by tapping the cells surrounding the ark, will cause the hero to sail in that direction. Navigating into another ark or a beastie will start a sea battle.

The voice of god will be completely ignored by sailing heroes, but does show up on the sail log for other gods to read.

Diagram of where the booty could be based on where a directional hint on the island pointed. For cells with a line through the middle, both directions could signal booty there.

The sea has many islands scattered around. Most of which are marked on the map with symbols displaying what they contain. However, islands may be empty despite what the map promises, and any island may contain booty. Islands are explored by navigating onto them, causing the hero to tie up their ark and explore the island. A large island will take longer to explore, but the hero is more likely to find something on it.

Some islands contain booty hints. A booty hint will never point to a booty that was found before or on the turn the hint was discovered. They come in three forms:

Directional hints come in the form of arrows. The direction of an arrow indicates which direction would be used most if you took the shortest possible route to the nearest booty (ignoring obstacles). So if the shortest route was three tiles east and two north east, the arrow would point east. If the shortest route would use two directions equally, either direction could be indicated by the hint. 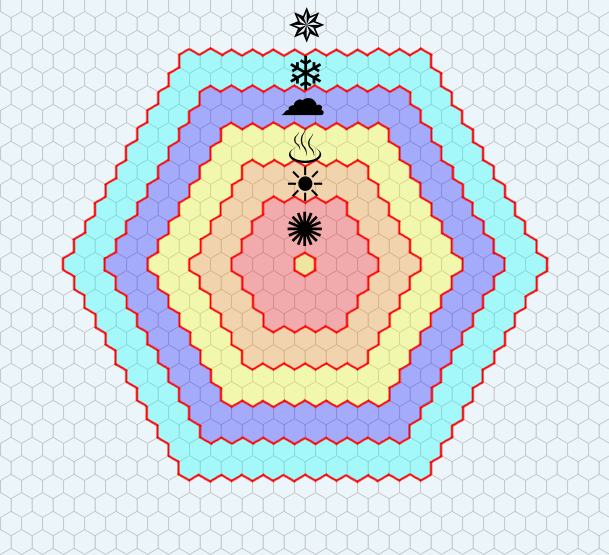 Diagram of where the booty could be based on what a hotness hint on the island looked like.

They mean the following:

Point of interest hints do not show a symbol where they were found, but rather make several points of interest ( ! ) appear on the map. One of them will contain a booty, and the others will be red herrings.

Sea battles occur when an ark encounters a beastie, or if one god tries to navigate their ark into another ark. Multiple arks can attack one beastie (or ark), and multiple beasties can attack one ark. During a sea battle, much like a battle with a scurrying boss, all opponents will attack every turn. Unlike a boss battle, however, the order in which everything happens is randomised, including influences taking effect. This can mean that an ark on low health may be dealt a finishing blow before an encourage reaches it.

A sea battle can be ended by navigating away from the attacker, but this is not guaranteed to work due to randomised action order. If an ark is attacked before it gets to move, it will not move at all and the fight will continue. If the battle isn't ended by one side sailing away, it will continue until only one side is left standing. Upon defeat, a beastie will unlock a hint, repair the ark, or give some supplies. An exception is a beastie with two words in its name, which will always drop booty. If an ark is sunk by another ark, the one who sunk it gets the booty from their hold, while the hero of the sunk ark drowns.

Every sail voyage has at least five booties scattered throughout the map, and each ark can hold two booties. There are four types of booty:

Manimals and fenimals have their own symbols which appear on the map where they were found and in the ark's cargo (see above). However, gold and activatable artifacts both use the treasure sign. Whether it is gold or an artifact will not be revealed until the hero exits the map. If the hero does not exit (and drowns or evacuates instead) they will lose their booty.

A sail can end in three ways:

Evacuating - If a hero runs out of supplies or stays for over 100 turns, they will be forced to evacuate. The hero will be spared death, thanks to being pulled to shore by the patrolling tugboats, but it comes at the cost of any booty in the hold. There will be a 12 hour cool down until they can sail again.

The Hero and the Sea: Sailing Manual