Difference between revisions of "Rocky Raccoon" 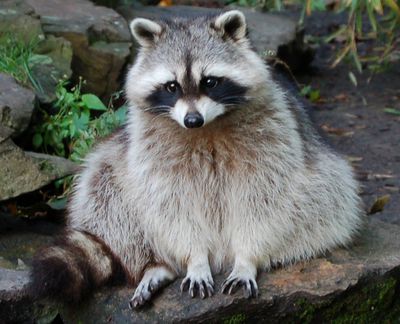 Sitting on a rock.

A very cute and common pet in GodVille. Rocky Raccoons are very well known for their reputation as scavengers, often emptying the inventory of many a hero when they're asleep or too inebriated to care. Despite their thieving nature, Rocky Raccoons make great company for any adventurer, even if a few of them are "a little" rabid.

Rocky raccoons are most commonly found in the mountainous regions of Godville, so if you want to go looking for one your best bet would to go searching near the Jagged Peaks or around the World's Apex. They love the snow and many an adventurer has accidentally stepped on one while they have been trudging through a blizzard.

When it is sunny, they often sunbathe on the rocks and generally don't do much all day long. They also like to dig for treasure so if you see a lot of potholes in the path, chances are there has been a rocky raccoon in the area recently.

Rocky raccoons look just like normal raccoons but have considerably longer and fluffier tails and their eyes can change colour depending on their mood. If their eyes are black they are content, If they are yellow they are excited and if they are red, well, just get out of there!

The other points of interest (excuse the pun) are their teeth. Depending on how hungry they are, Their teeth change length. This may seem quite alarming, but it is perfectly normal. However if you also see them drooling, you many want to check whether they have an aversion to water because they may also have rabies!

When they get angry, their eyes turn red.

In their natural state, rocky raccoons are very timid but will ferociously defend their territory at (almost) any cost. They are accomplished thieves and are expert foragers, and can smell their favourite food (rocko-berries) from two miles away. Anyone crossing an area infested with these creatures must keep an eye on their belongings.

Even tame rocky raccoons still try to steal anything they can find, especially gold and food. Clever (very rare) heroes can use this personality trait to their advantage should they be able to teach their raccoon to steal on command from other people. In battle a rocky raccoon will claw at its master's enemy with its claws and, should the situation require it, will bite the enemy giving them rabies.

Rocky raccoons are very nimble and quick, masters of camouflage, and can deliver a nasty bite if they feel like it. However due to their shy nature thy are more likely to run away than to help defeat a significantly stronger foe, and will often break a hero's items by "examining" them with its teeth while the hero is busy.