Difference between revisions of "Resurrection" 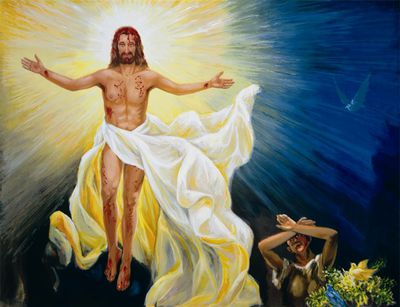 Occasionally, a hero or a pet may be killed in battle. This is a most sorrowful event but it can, like most problems, be remedied. This miracle cure is known as resurrection and has been tried and tested over many millenia. Essentially, all it involves is a benevolent god raising their hero or pet from the dead so that they can carry on doing stupid things in their god's holy name. The method used varies between gods but usually involves a rusty defibrillator (possibly found in the guts of a dead monster who ironically died from myocardial infarction) and if the hero/pet is lucky, powerful anaesthetic to make the process less of an annoyance (i.e. lots and lots of beer). The more cautious gods tend to call an ambulance (or at least teleport it to the scene without even asking), but when all else fails you can always just let the dumb creature die and then go and make a deal with an anthropomorphic representation of death. The reaper of souls is bound by universal law to obey the gods so no worries there then. It's worth keeping in mind though that necromancy is always good fun as an alternative to resurrection; nothing beats seeing an undead pet running around scaring villagers into giving up all their pies.

If a hero dies, then all of the buttons on the Remote Control are temporarily replaced with just one option, 'Resurrection.' It costs 0% Godpower to use and will instantly bring the hero back to life. If a god hasn't resurrected their hero for roughly 24 hours, heroes can and will resurrect themselves -- but they may be in a bad mood for quite a while afterwards. It is recommended that the god resurrect their hero as soon as possible so as not to slow down the hero on their quest.

Resurrection always occurs at (brings the hero back to) the last town the hero visited, usually in some sort of shrine.

Also, if your hero has an aura of reviving, he will automatically resurrect himself after just one minute. This is probably the most sure-fire way of making sure your hero isn't slowed down with such an insignificant thing as death.

Pets are hardy creatures, but they are still prone to the occasional death if they by chance let their guard drop. If a pet remains dead for a certain amount of time (60 hours)[1], the hero will bury it and the pet will be forever lost. The hero may then tame a new pet, but the first one will remain in their mind for a long time yet. It is advisable to do as much as you can to get the pet resurrected before that time elapses.

Unfortunately, there is no influence a god can give to resurrect a pet. Heroes must resurrect their pet themselves during the time periods in which they normally pray. They can only do this by visiting a priest in some place of worship and paying them a hefty fee for their services. This amount of gold can be calculated with the formula below:

Note: this is an approximation; recent resurrections have actually only required x * level of pet in gold, where "x" has been exactly 425 and 440 in different situations. It is unclear whether the amount of gold needed can fluctuate, or whether the formula should be permanently updated.

The god cannot influence the resurrection of a pet, but they can certainly do a lot to create the necessary circumstances:

Remember though that once the hero has over 3000 gold, a god's influence made during the hero's travels (not in the Arena) may randomly turn these into a gold brick, so influencing becomes counter-productive if you are trying to save up for a pet's resurrection.

Unfortunately, the hero isn't smart or determined. He will do his best to waste all that hard-earned money on food, drinks, parties, or sucky rock concerts. Fortunately, there are a few ways to prevent him from doing so. The hero bypasses his drinking routine if:

Generally, the safest way is to urge the hero to complete the quest ("Complete quest faster!") and then nag him to search for treasure ("Dig for treasure!") during his trip to Godville.