Difference between revisions of "Qu'tox Ocean" 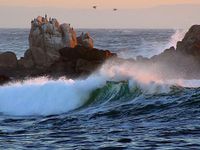 The Qu'tox Ocean is feared by many experienced sailors for its lethal maelstroms and unpredictable weather patterns. It is rumored that the Bermuda Triangle is hidden here somewhere as well as the resting place for articles previously added, but since deleted from Godville, but such reports cannot be confirmed or denied. The only known group of islands in it is the legendary Sacred Archipelago with only one inhabited island, for the rest are wastelands which are the location of time-share condominiums sometimes used by the Antihero or Feral Hero when on vacation. There is also a legend told by few traders that in the ocean itself there is a gigantic sea serpent. This monstrous beast has been said to swallow entire ships that try to manuever around the Sacred Archipelago. These stories might not be true since traders are selling false artifacts that supposedly came from the monster itself. It is advised that heroes do not believe such stories and freely travel to and from Los Adminos.