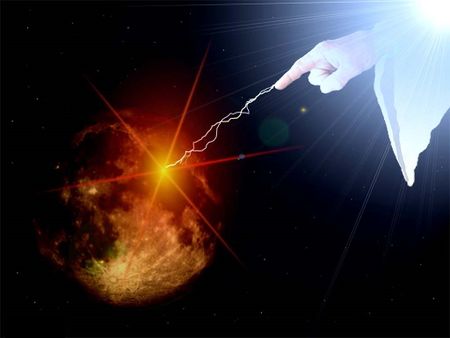 Punishment - quite literally raining on the hero's parade. Punishing a hero is a sure way to make him fear you.

Using the 'punish' button on the Remote Control costs 25% Godpower and sends down a divine miracle, but not a pleasant one. It can sometimes heal, but most often takes away some of the hero's health. However, the hero will sometimes see this as a sign from their god and may Pray there and then. Punishing your hero too much may kill them off, and it also effects their Personality. A hero who is punished a lot will grow more evil every time they are punished as a result of hard times. If making the hero evil is intentional, they must be punished often otherwise they will eventually drop back to neutral.

However, your hero is not the only one who can be affected by your intolerance, in fact, if used during a battle against another hero or monster, a god can punish the opposition, thus helping your hero. Unfortunately, gods do not have the best aim, so the punishment may occasionally miss.

So how will you punish your hero oh vengeful one? The following methods are the most widely used and for good reason:

Tip: Use the deep booming voice, NEVER the helium effect one. Learn from the mistakes of other gods.