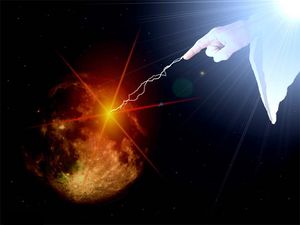 A Punishment — quite literally raining on the hero's parade. Punishing a hero or heroine is a sure way to make them eviler.

To punish a hero, a god must use the "punish" button on his Remote Control at a 25%Godpower cost. Since divine intervention (even not pleasent one) is special, a hero will always write about it in her diary.

Punishment will affects a hero's Personality, steering {his or her}} towards the side of evil, but constant punishment is needed to remain evil otherwise a heroine will eventually drop back down to neutral. A n encouragement will speed the process of reverting to neutral or even steer towards the good side.

!Hero's Diary↻
09:42 PM A lightning bolt to the forehead quickly refreshed my mind and filled my body with energy. Yo-ho-ho, who's next, you pansies?
!Hero's Diary↻
11:09 PM A flurry of well-aimed fireballs from the heavens neatly cauterized all my wounds, leaving me fighting fit. Thanks for the help, Fearsome One!
!Hero's Diary↻
11:19 PM A giant fireball appeared on the horizon and streaked towards me with alarming speed. I ducked just in time. As it whizzed past and disappeared, its intense heat rushed through my body, restoring my health. Except for my now smoldering eyebrows.