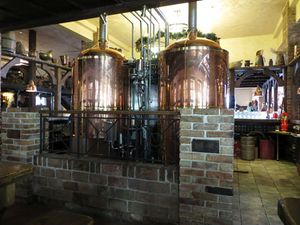 As a former adventurer, Lara knows the "Do I save some money so my freckin' Goddess stops smiting me, or do I go and have a beer...?" struggle that all heroes and heroines face every day. That's the reason she decided to start a special Saving (for) the Heroes Initiative: every 33rd customer that comes into the Progress Bar will get her money deposited in her own name, and progress in the Pantheon of Savings.