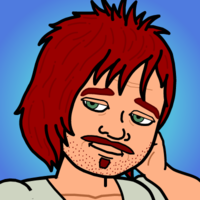 My hero's name is made-up. However, I don't recall inventing it so I probably stole it. Google sayeth not so the origin is probably buried in my pre-internet days. I expect that if I dig through my boxes I will find him, or some variant of him.

My mental image of Thulkred is of a hulking red-headed barbarian with green eyes, singed eyebrows and inky fingers. He's not too bright and is rather deaf - perhaps due to the assorted bangs and flashes he's set off while combining artifacts and melting gold bricks from gold coins.

He is about 195 cm tall and weighs 120 kg. He has massive feet, 35 cm long. He is fond of wearing tatty t-shirts with obscene prints on the front when kicking around the taverns.

His motto, "Imbibus invictus", literally "drinking invincible", freely translates as "unbeatable drinker". His record is in Los Adminos on 3rd Aug 2013, when he:

Actually that effort only earned him second place in the drinking pantheon, after Gary-sue. I haven't had the heart to tell him yet.

He joined the "Band of Rejects" Guild on 31st May 2013. He made it to "Cardinal" then switched to the "Blue Feather" Guild as he thinks the "Careerist" badges look cool.

His pet is a ninja tortoise yclept Oy, whom he tamed on 23rd Jun 2013 at 07:11. He likes his pet and plans to keep it through to Level 30. After that he'll wait till it gets knocked out and release it.

This section tracks the progress of my temple. It may be of some use to later comers curious about how long it takes to build a temple and the best ways to get bricks. I built my temple much faster than most players. 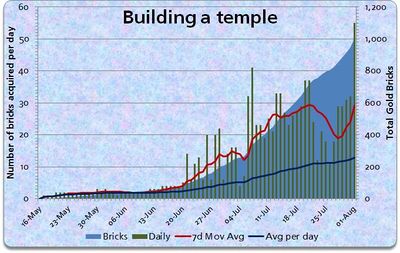 I fooled away my first month in the game, though I called it learning the ropes. Then I decided to see how quickly I could complete my temple. I had no hope of beating SBFH's time (70 days, Level 29) but I figured at least I might come close enough to rate an honorable mention. I didn't keep proper track of bricks for the first month, so the number of bricks each day for that period is indicative rather than definitive. Once I started building in earnest the daily count is accurate.

I tried to get some bricks every day. Since GodVille had to fit around other events in my life there was no specific number, but as a general guide I aimed to get at least my current overall average, rounded up. On my best day I acquired 55 bricks, on my second-best 41 bricks. I acquired 30 to 40 bricks seven times. From the time I joined GodVille it took me 78 days to complete my temple, and Thulkred was at Level 29.

I planned to post a table of brick acquisition here but couldn't really see how it would be more informative than just posting the chart instead.

Acquiring bricks is easy. The main difficulty is being stubborn enough to keep at it until the temple is complete. It takes a certain type of crazy (and willingness to spend money) to collect 20-30 bricks per day.

See Getting Bricks below for my tips on how to acquire bricks.

The richest source of bricks is digging for boss monsters. There is a plethora of advice available on this wiki about the best ways to dig. Some is good, some is less good.

A much more economical method, adapted from SBFH's, is to identify the second that the Godville clock ticks over from one minute to the next, and to dig in that second and at exact 20 second intervals from that second. Doing this I usually get some sort of response in black print rather than mostly responses in blue print, and I still get a boss trigger reasonably quickly.

A good method that doesn't require clock watching is to wait for the Earthly News to change.

The single biggest source of bricks is from melting gold pieces using actions (Encourages and Punishments). Under these influences, 3,000 gold will sometimes melt into a brick. You'll typically get enough gold from a boss monster to make one or two bricks, sometimes more if some of your allies die or the boss makes gold (auriferous). More often than not you'll get a brick as part of the booty from fighting a boss, and you only have to wait an hour between boss fights so you can easily manage several boss fights per day. Melting works best (about 1 in 3) When you have enough gold on hand for multiple bricks. If you can't afford to burn charges, stop melting when you drop below 6,000 gold because you'll drop to 1 in 4 or 5. If you have more than about 15,000 gold, actions seem to work even better, down as low as 1 in 2. This means that if you are in red health it can be nearly 50/50 whether an Encourage will give you health or a brick.

The hour you must wait before you can dig up another boss is based on the time the previous fight ended, not when it started. I find that digging in that very minute is often successful, but often when that minute rolls around your hero is in town or is fighting a monster. You can try commanding him to go back to town a minute or so before the hour is up in the hope of digging up a boss on the way back to town.

A surprisingly good but flaky technique is Building up. If you have, or can make, some artifact that manufactures bricks (such as Transmogrifier) you can get multiple bricks by converting your