Difference between revisions of "Pandora's box" 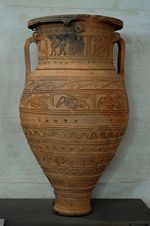 The Pandora's Box was named after a mortal woman, Pandora, who was married to Epimetheus. She just had to open the lid of the jar Zeus forbid her from opening as she longed to know what was in it. When she opened it, evils and plaques flew out and stained the world of Godville with sickness, age, and death (though resurrection is just a click away). Buried deep inside was a little "hope" that was shared with many to overcome the evils that escaped. One might have noticed that what she opened was a jar. Yes, it was indeed a jar. No one knows why it was named the "Pandora's Box" instead of the "Pandora's Jar". Researchers say that it may have been due to some half-blind archaeologist...

The possible effects it may have include:

This item can affect your hero in some random way. (requires 50% of godpower)