Difference between revisions of "Order of the Monster God"

Order of the Monster God (OMG) is a guild for monsters, half-breeds and monster lovers.

To join, simply tell your hero/ine ‘Join "Order of the Monster God" guild’ until he or she listens to you, and the game will do the rest.

After you join the Order, from time to time the game will give you a "guild quest". If you want to leave us, that's OK, but if you don't then all you have to do is wait until your hero is on their quest (meaning out of town and fighting monsters) and tell them "Cancel quest" until they listen. (When you reach "Cardinal" rank the game will stop giving you these quests, but you will still need to log in at least once every 28 days or your hero will leave the guild anyway.)

Already have a perfectly good hero and don't want to leave your current guild? You don't have to! Alternative accounts are welcome here. Make your monster and send him along.

We have an informal "don't ask, don't tell" policy on alts - you do not have to admit you're an alt, and even if you do admit it, you don't have to say who your main is. You are who you say you are. Period.

What is the guild about?

The official word is, "The God of Monsters sent his Prophet among you to spread TRUTH and ENLIGHTENMENT. He founded this guild to be a friendly place where information and news about Godville's native species can be invented shared and enjoyed."

We started out as a few people who saw all the references in the game to the "god of monsters" and thought it would be fun to have a guild dedicated to the monster god. It has succeeded beyond our dreams.

We are not here to dominate in the arena, nor to present a daunting wall of unity, nor to buy the hearts of the townspeople. It's fine if you want to do any or all of that, but you don't need to be a great fighter or an open-handed dealer of miracles to be a good member of the Order! All we ask is that you bring your good will and sense of humor, and enjoy your time with us. May that time be long!

The Name of the God 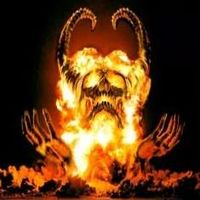 The God of Monsters during Ohm'G Den

The Name of the God of Monsters is Ohm’G, pronounced much like Greek omega but ending with a “geh” sound instead of a “gah”. He is also known as "The Leveler".

The sign of the God is the combination of the Ohm symbol (Greek capital letter omega), with Russian capital letter Ge (Greek gamma). The apostrophe in the name is a glottal stop, as if a vowel has been elided.

If the correct Unicode characters are not available, Greek letters omega and gamma can be used to approximate the sign.

If space is very short, the Ohm symbol or the Greek omega on their own can be substituted as shorthand for the full sign of the God.

The Ohm is a measure of resistance, so the term is appropriate for the resistance by monsters to oppression from the gods of the sky and their enslaved heroic hordes.

The Ge represents a link to Russian Godville, where the God of Monsters also watches over His creatures.

Origin of the Name

The name is onomatopoeic. It was the God’s battle cry in the time when He was the greatest of monsters, before He became a god. 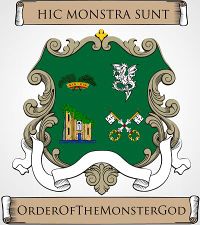 (Thanks to Mighty Overtaker)

Cardinals of the Order

Temples, pet medals and arks completed by guild members while in the guild. (May include members who have since left the guild.)

The Occulus in the Guild Hall dome

Since The God of Monsters is a cthonic deity (as opposed to His enemies, who are gods of the sky), the Founder decided that underground was the most appropriate location for the guild hall. After some unfortunate surprise encounters in cellars and crypts, His Prophet found a spacious domed hall in the sewers of Godville. It was a little dark and dank, and infested with crocodiles, but once the Prophet rerouted the sewer and lined the walls with stone stolen repurposed from public buildings aboveground, it spruced up pretty well.

The sewers provide an advantageous position from which OMG can eavesdrop on the councils of other guilds, and at some stage to dig a sap to connect to the Dungeons, to allow homesick members to visit their old haunts.

The crocodile problem initially seemed insoluble, and OMG considered taking up a generous offer of empty graves in the cemetery, but decided to retain the original home in the sewers after the crocodiles beneath the couches were converted to (slightly singed) crocodile hide on the couches through judicious application of "Dark Flame". Once the firestorm was over, the God simply resurrected His Prophet. Nobody resurrected the crocodiles.

The addition of an occulus to the dome greatly improved the ventilation and lighting in the main hall, at the price of some privacy. Members are advised to save their secrets for the back rooms and to speak only generalities in the main hall, in case other gods are peeping.

One alligator survived the firestorm. Nicknamed "Snappy" and adorned with a pink ribbon, he has become something of a guild mascot. He enjoys swimming in the spa.

The addition of a spa has significantly improved the amenities for some of our members, although others now find the hall uncomfortably warm. The spa is heated by convection from a new fire-and-lava monsters annex to the guild hall located below the spa.

The spa also provides a convenient location where water monsters can come to consult The God Of Monsters.

Bossferatu > I just got a "Go Away" doormat for going to arena. Should I keep it for the front of the guild hall?

The God Of Monsters > I think that would be most appropriate!

Bossferatu > Great! I'll hide it in a secret place so the merchant won't make me sell it.

The God Of Monsters > Wiki updated! Now it is lore.

Bossferatu > Great, boss! I'll just extract the doormat... and put it in front of the door. There! Good as new. That oughta keep 'em away!

Where is all this gold coming from?

Being the collected words of Prophet Of Monsters, as passed down to him in his official capacity as the prophet of The God Of Monsters.

The Prophet of Monsters was given a vision of the end of days.

I saw a great cloud loom up and cover the land. Men looked up and shuddered. Monsters cowered.

My gaze was drawn to Godville, passing over forests strangely peaceful. What heroes I saw, were mostly ragged and purposeless – obvious renegades. Few were digging.

Godville was a mass of golden temples, tens of thousands of them. In many of the temples, frozen heroes stood waiting for their gods to re-awaken them. The streets were eerily empty.

My view drew in upon one temple. A gaunt hero was cementing the last brick into place using golden mortar. He tapped it this way and that, then stepped back to admire his work.

The temple began to glow and to tremble, and then the gold of its walls turned molten and splashed down over the hero in a wave.

The melt-down spread to neighbouring temples like a contagion, each affected temple glowing and collapsing and infecting the next. Within minutes, Godville was drowned beneath a tide of molten gold. Here and there survivors clung to high points above the flood.

Clouds of smoke billowed up from burning Arks. What value have wooden boats against a searing flood of liquid metal?

The gold flowed down into the sewers and disappeared, but my uncanny sight could follow it through the sewers until it converged upon the empty Guild Hall of the Order of the Monster God. More and more gold flowed into the Hall, filling it, until a fountain of gold jetted up through the oculus.

Suddenly the land was lit by a flash brighter than the Sun! My disembodied viewpoint drew back and back, until I could see an enormous golden mushroom cloud growing where Godville had been. The evil city was gone.

From the point of the explosion, golden veins spread outward through the ground, outlining and penetrating a huge figure beneath it. Earthquakes shook the land: trees fell, mountains slid, and lakes and rivers spilled. The land rose and cracked, and lightning struck down from the sky. Looking up, I saw a great host of gods gathered there, casting thunderbolts like a cascade of fire.

My Lord rose from His den in the ground like a continent from the sea. Dirt and cities fell from His back. He cast back His head and roared defiance at the host of the gods!

A paw swiped across the sky, and a thousand gods were caught up and crushed. Their accumulated power flowed into my Lord and He grew. Again and again the paw smote, until the host of the gods was reduced to a ragged handful fleeing in terror of their lives. The paw pursued them, and none escaped.

Now my Lord was grown even to the size of the globe of Godville itself, and His feet sank into the ground, and His legs followed, until the earth reached His chest. And when my eye drew back I saw that His legs had emerged from the far side of the globe, and that He and the globe had become one. And the Land glowed in colours: red, green, blue, and black. And His paws became flippers.

And my Lord spoke, and said “Once I was Ohm’G, but now I am Ohm’Gaia. The game is over and only I remain. Great Random, end it now.”

The cosmic turtle that was Ohm’Gaia swam like a jewelled bug in the darkness, and waited for The Great Random to toss the last coin.

Time froze. Then my view drew away, but Ohm’Gaia shone in the darkness forever, like a star embedded in obsidian.

These rankings are no longer tracked here. (The heading has been left in order to avoid creating linkrot for certain posts in the Guild Forum.)