Difference between revisions of "Operating model of a black hole"

The laws of physics in Godville are largely unknown and change on a regular basis , but they are known to have a few things in common with ours. Black holes are arcane secrets created by evil wizards in pointy hats.

A working model of one is worth more then your usual artifact but when a hero can get their hands on one, they are usually broken despite their description (hence Godville is still intact). Nobody knows why someone would want to create a working model of a black hole, but it might have something to do with megalomania.

Black holes form at the end of a star's life but only if it has more mass then the Chandrasekhar limit; 1.4 times the mass of our sun.

The star collapses under its own mass in a catastrophic event known as a supernova, leaving behind a black hole which sucks in everything,even light. A black hole consists of a singularity, a point of supposedly infinite density, surrounded by an event horizon, the point at which anything that goes past it has no chance of escape.

The event horizon has a disc around it (the accretion disc) composed of the matter the black hole is slowly sucking in. Some black holes also have relativistic jets, matter that is being ejected. The exact mechanics of black holes cannot be fully understood until we develop a complete theory of quantum gravity, but various metric attempt to describe black holes with certain properties. 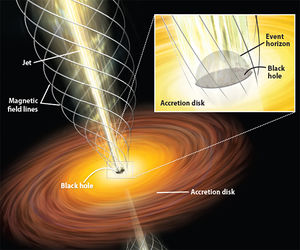