The Neferkitty is an undead monster, more specifically, it's a cursed mummified cat. Its origins date back to the former Egoptian Empire, that was located in the Desert of Former Alkies near today's Egopolis. 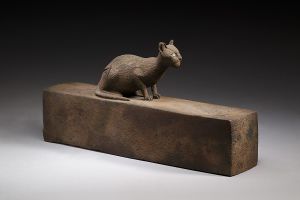 The circumstances of Neferkitty's death are unknown. Having a lot of enemies in the royal palace, there are speculations that her death was a premeditated murder. A papyrus with a complicated text was found in her chamber along with the body, the only legible part of it today being "💁❓💀🐈".[6] 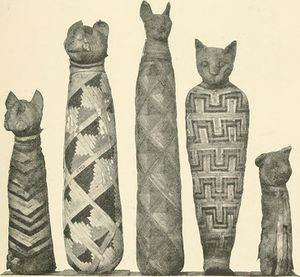 The heartbroken empress had decided to have Neferkitty embalmed and mummified in accordance with ancient Egoptian funeral practices typical for the Snu-fru Dynasty. Neferkitty's burial chamber was carved in the sacred wall in the Triffids' Valley (formerly known as the Valley of the Blings) and decorated with scenes from Egoptian mythology and from Neferkitty's former life. The tomb was filled with generous equipment that was supposed to ensure Neferkitty a luxurious afterlife. The burial equipment included Neferkitty's favourite objects from her life, such as her beloved napping pillow, a paper bag and 2000 mummified mice.

The Neferkitty's tomb was discovered in (1956 g.e.) by one of the leading Egoptologists of that time, Vache Q. Picard. Vache was originally hoping to find the tomb of Kleptopatra herself, and when she found a perfectly sealed tomb with Kleptopatra's cartouche carved on the entrance she was most surprised to have found her cat's tomb instead. 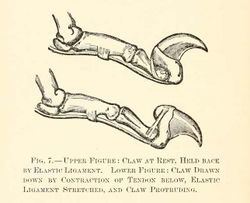 Diagram of a cat claw[7]