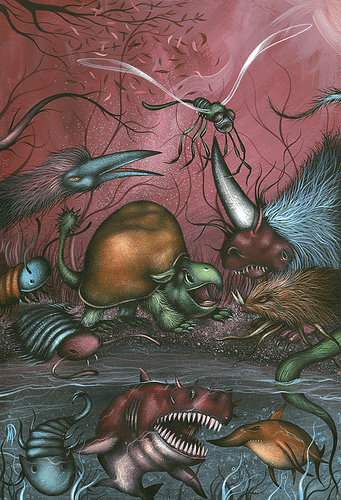 In the realm of Godville, there are many ridiculously ferocious creatures that roam the countryside. These monsters are often feared and avoided by the denizens of the land as they are often malicious and inflict torment and even death on everything that crosses their path. It is unclear from where these creatures emerge from or why there appears to be so many of them, but it is rumored that mystical landmarks known as Spawn Points are responsible.

Monsters appear to be attracted to objects known as Milestones and often gather around them to prey on unsuspecting passers-by. Despite their fiendish nature, they are a critical source of experience to Heroes as they assist in honing the hero's skill through mortal combat. In addition, most monsters inexplicably carry Gold and Artifacts. It is theorized that, despite the fact that they have absolutely no use for these items, monsters carry these items simply to lure heroes into attacking them.

These creatures also appear to have the ability to inter-breed, creating new species at a regular pace. It is unclear how this happens as heroes are often too swift in dispatching monsters and too preoccupied to take the time to observe their mating habits. One thing is for sure, however: monsters appear to be limitless and capable of reproducing at an alarming rate. If left unchecked by heroes, they would most likely overrun the entire realms.

There are rare breeds of particularly intelligent monsters which can be tamed as pets should they be defeated.