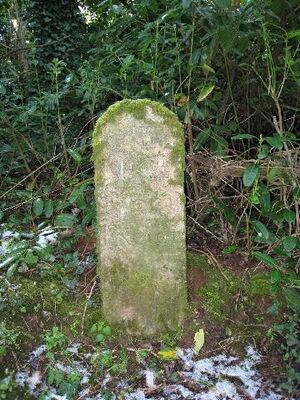 In times of old, when the world of Godville was unexplored and navigation was dodgy at the best of times, the first Heroes set out to standardize routes to other Towns. Heroes though are stupid, and know it too, so made sure to mark their paths so that they would be able to backtrack if they got lost. These markers were milestones; large navigation-aids of rock which the heroes planted in the ground roughly 1 mile apart from the previous one. However, the distance is usually at best only approximate due to the laziness of the heroes who fixed them in place. Over the millenia, the paths from milestone to milestone were used more and more, causing dirt paths to trace the routes in the ground. Many now traveled these routes, including many wizards who, out of boredom, enchanted certain milestones which as a result now attract Monsters. To make matters worse for travelers, the routes are unnecessarily messy and meander all over the place, but the heroes who created them never had sat-nav to be fair (if they had, the routes would bypass the known universe to reach the intended destinations because direct routes are apparently not good enough; 'traffic avoidance systems' indeed).

Surprisingly enough, the fact that these milestones actually correspond to something logical hasn't always been known. In the so-called 'dark ages' when heroes had just forgotten how to light their candles, much knowledge was forgotten. This is mainly because the limited minds of the stupid idiots couldn't remember more than one thing at a time and so had to just put up with only knowing that they needed to work out how to light their candles again. Once they had gotten round to doing this, they suddenly realised that they had thus forgotten what they had laid down the milestones for, and so for many hundreds of years it was thought that the distances between towns in milestones were completely arbitrary and never the same. Of course eventually the dirt paths linking the milestones were rediscovered and the age of easy navigation crept back into the world, its pride wounded, but ultimately pleased to be back. Luckily, these early days of Godville have long since passed.

Today, all heroes commonly use milestones as their coordinate system with the origin being Godville since it is the capital city of the world. Therefore this town represents 0 milestones in the system. Other towns are located at a certain number of milestones away, as this number is the number of milestones on the route from the town to Godville. All towns are always at the same milestone as it has been proven time and time again by careful observation. Below is a list of the towns for which their location in milestones is confirmed. Towns over 200 milestones away are said to be past the Outer limit and are visited by heroes rarely.