From GodWiki
Revision as of 18:17, 6 December 2019 by Djonni (talk | contribs) (Also removing _ in Gallery:Landmarks for same reasons)
(diff) ← Older revision | Latest revision (diff) | Newer revision → (diff)
Jump to navigation Jump to search
This page is about the map of Godville. For other pages related to Godville, see Godville (Disambiguation).

Godville is the world in which everything in the game takes place. This world is huge and has a variety of geographical features and towns. 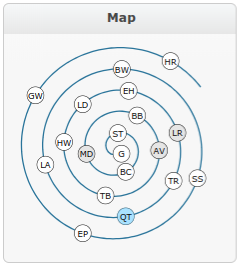 An example from web of the map below the Great Fold, showing towns at home (white), wandering (grey — MD, AV, and LR) and the hero's location (blue — QT).

Once upon a time, the heroes and heroines of Godville wandered, questing and fighting monsters through the lands, stumbling from town to town, barely even paying attention to where they were or what was around them. The roads and villages were a blur, each fading into the next, a foggy haze of taverns and traders. Towns were well behaved, obediently staying where they were put. The more situationally aware heroes would sit in quiet corners or around campfires trying to figure out where the best healers and traders could be found. But most would just stumble and stagger up and down the road, secure in the knowledge that a town would be close enough to crawl to, even with the most serious of blood loss.

Then one day,[1] one day, a mysterious faction who had been slowly acquiring mystical and political power was suddenly thrown out of the shadows in the most dramatic of ways. The shadowy Cartographers Cabal, a dark alliance of thaumaturgists, geomancers, and GIS specialists, unexpectedly completed an arcane ritual many years in the chanting, folding and warping the leylines of the land of Godville. Their goal was simple: the creation of a must-have, definitive map of the entirety of the known Universe, helpfully annotated, accurate to scale, and mass producible for sale to every single denizen of the lands of Godville.

But the inky ceremony went horribly, terribly awry. A metric-imperial mismatch between alternating teams of encanters led the magic to twist and fold upon itself; the conflicting measurements swinging back and forth strummed the leylines of the world into sympathetic frequencies, causing moiré patterns to pop in and out of the æther, sending waves of topographical energy surging and rippling through the fabric of Godville. The naïve Cartographers, meddling with forces they didn't understand, failed to notice the tension straining in the very fibre of the land. When those surging waves inevitably broke and crashed, dashing their unholy energies onto the landscape, forever warping and corrupting the geometry of Godville, they were more surprised and horrified than anyone. 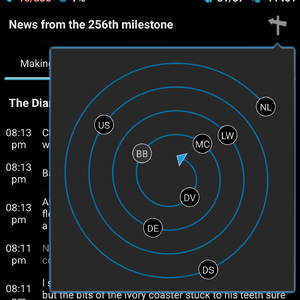 An example from mobile with dark theme of the map above the Great Fold, showing towns at home (black), wandering (grey — BB), and the hero's location and direction (blue arrow).

For in their foolish greed, the Cartographers Cabal had masterminded their financial undoing. They failed, miserably, in their mercenary ends. Instead of producing a definitive map of the world, they instead perverted the very essence of the landscape. The world lay twisted, figuratively and literally, winding upon itself in ever-writhing coils. Hitherto unknown geographies popped into existence, whole towns and villages manifested spontaneously, full of townsfolk and traders and overflowing sewers but with blank histories waiting to be written.

The canted verses designed to ensure the map would be rendered in easily-reproducible, commercially viable, simple to transcribe yet accurate enough to be essential — those verses were in mid-utterance when the built-up forces of the spell cracked and split. Riding the shockwave as it surged across the landscape, the raw meaning of the verses cooled rapidly in the shockwave's wake, changing phase and condensing suddenly from metaphor to synecdoche, precipitating out of the air to form thin layers of raw map which grew like crystals in the hands of every single person in the land. Thus magically crystalised out of the gerund of free-floating map-stuff, the people of Godville soon realised that their new maps spontaneously redrew themselves, constantly informing the holder of the lay of the land, the locations of towns, features and attractions they may find in those towns, and most usefully of all, a helpful blue mark that showed the holder at all times where they were and what direction they were facing. As the surging power of the tragic spell washed and sloshed across the land, compressing and dilating distances, moving towns and roads capriciously and unpredictably, these new maps obligingly updated themselves with each change, giving travellers clarity and certainly of their surroundings, which otherwise would have been more bewildering and disorienting than ever before.

Even better, as travellers move further out from the capital, crusading on epic quests to lands far distant and far less familiar, the map follows them. A great crease appeared in the landscape between milestones 255 and 256, a physical fold between the densely populated lands close to Godville and the sparse outer reaches of the landscape. Any traveller crossing the Great Fold will find the map has helpfully redrawn itself, adjusting its scale and limits, to show the landscape out to the farthest known territory — Newland, found, when at rest, at Milestone 1499, the furthest of the charted lands.

And thus, in the terrible Mappening, did the Cartographers Cabal irrevocably alter the nature of Godville, a cruel lesson in the evils of greed, ambition, and the importance of establishing standardised measurements between collaborating teams in long-term projects.

And the greatest irony of all? The poor, ignorant Cartographers didn't realise that the map they sought had already been produced by the Gods. More specifically, by a God among gods; the glorious

Spode  , venerable and now retired, had produced a beautiful, scale-accurate map of the land, now sadly rendered obsolete by the broiling, changing landscape we now see. 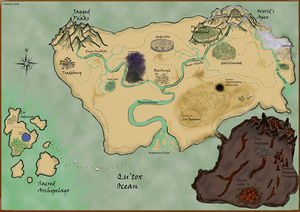 Historical map of Godville. Full version is here. Note: New towns have been added since this was created.

Spode  . It may be updated by an enthusiastic god as new places are added. Click here for the full version in all its glory.

Milestone numbers between towns and the capital are accurate, with the milestones on land being the black and the ones in the sea being attached to red buoys. The color-coded routes through the milestones are the paths that heroes take to get from the capital to another town.

For more information on the milestones and the routes, see here.