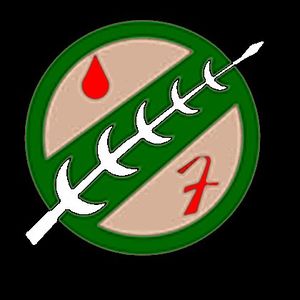 If you desire your hero/heroine to become a member of our family of warriors, simply tell them join the "Mandalorian" guild. For largest chance of success, send the command while your hero is "'outside of town"' and being idle (i.e. not fighting a monster). Do NOT cancel your current quest first. Once they finish their special quest, they will be brought into the guild as a fellow brother/sister Mandalorian with all rights and benefits of the guild shared with them. 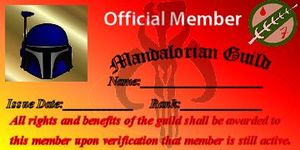 RogueSaber   was moved by her request and has allowed Tahiri to remain. He created the Mandalorian Guild for her to call home and to recruit other warriors to help in her quests.

1. Every opponent is fair game in the arena. This means there are no restrictions against battling against a fellow Mandalorian. Arena battles between Mandalorians and non-Mandalorians allows each warrior to prove his/her worth, increase skill and raise experience.
2. Mandalorians do not forfeit. Forfeiture is a sign of weakness. We will fight to the death before we will show signs of weakness.
3. You may use Voice Commands (VC) as you see fit. However, use of profanity is looked down upon.
4. You may use Encouragement and Punishment in any manner you prefer.
5. Gods may also choose to simply stand aside and allow their hero/heroine to battle it out on their own. This is acceptable for it allows the god to see how well their hero/heroine is able to fare in unaided battle.

As with other guilds, the Mandalorian Guild incorporates a Guild Council chat. This is a conference chat that allows information to instantaneously be sent to all current members of the guild; no matter where they may be currently dispersed. Members can introduce themselves, ask questions, submit information, send warnings, chat, announce special occasions (e.g. birthdays, new pet, temple completion, etc.), chat, etc.
The Guild Council is available to ALL active members of the guild. However, members who abuse the chat can and will be banned from the Guild Council with little hope of having the ban lifted. Some (but not all) bannable offenses are:

The Guild Council is accessible to ALL members in your Friends section under "Invite a friend".