Difference between revisions of "Look for a new quest" 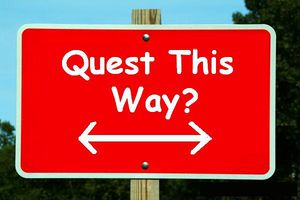 A rare quest indeed, this one is also one that is a misunderstading. After completing thir previous journey and arriving at Godville, a Hero must report to the person who gave them the task. Sometimes that human may say, "Cool! Now go find another quest while I use the bathroom." Heroes may then take this sentence to heart and depart on another adventure. Now, one may think that finding a quest is easy-peasy, but it's not. To complete this important task, one must find an incredible quest. One that will astound the Boss. A quest so rare and exotic, no one's ever heard of it before. One cannot simply walk around yelling, "Hey! Anyone have a mission for me?" No. A hero must travel through lands and talking to mayors, kings, or any legendary Quest-givers to complete the mission at hand.

Throughout this time, Heroesay have a bit of trouble getting the job done. Many regular townsfolk may want the hero's services. The citizens usually chase them asking for their laundrey to be done or garage to be cleaned, and they'll offer very little money for these duties. Heroes must outmaneuver the mob behind them. Monsters tend not to attack when the crowd is following a hero since they know the mass of humans can kill a monster simply by running over it. Tougher beasts will often attack the mobs in order to fight the hero in peace.

Once the pawn arrives at a new Town, they seek out the one in charge to ask for a life-risking quest. 90% of the time, it's a letdown. Chiefs know that an adventurer's mind is to small to take on Elite challenges. Then the chase continues.

After about 20 hours, the little human should run into some luck. Maybe a dying knight asked the hero to finish his quest, maybe he found a member of a secret cult and took the guy's orders, who knows. The thing is, it's finished. Now the smart guy rushes back to Godville, reports to the man who was waiting outside the bathroom, and embarks on another journey.

Tip: Hide in trees. Everyone knows mobs can't climb trees when they have pitchforks and torches!!