The driving force of Juliana the Divine

Hey there i am Juliana, 26 years old and live in western europe. What do i like to do? Gaming, keeping track of stats, travelling with the train and working. What is the most fun thing i have seen on godville: That my hero keeps failing and digging up moles. Is there anything godville can improve upon? Yep, they can make a widget for quickly seeing what is happening. If you would describe yourself in a few words, what would it be? A helpful, technical and somewhat sturdy girl.

Artwork of the Gods 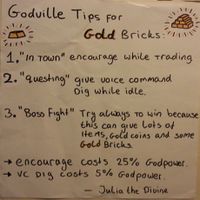