Difference between revisions of "Jackalope"

The Jackalope (“Lepus Cornutus”) is a fuzzy-wuzzy bunny wabbit monster of Godville characterized by the bucks’ (or male Jackalope’s) seasonal growth of some very slick and sweet antler-type things.

The antlers of the Jackalope do not appear to serve any particular purpose beyond just generally looking cool, but monsterologists are only beginning to study this fascinatingly adorable bunny rabbit.

The Jackalope is first recorded as appearing in the region vaguely known as central Tejas[1], somewhere in between Dogville and Los Demonos, in those little shops[2] merchants sometimes have where they sell things like trinkets and raisins and Eager Beaver “nuggets.” Just what are those, exactly?

Origins of the Jackalope

The origin tale of the Jackalope states quite clearly[3] that in the dream before time, it was the Bunny who had antlers, but he bestowed them unto his twin brother Buck, as Bunny could burrow underground but Buck could not.

The male Jackalope is then known as a “buck,” as, regained of his horns, Bunny and his twin Buck are essentially one and the same.[4]

The Jackalope is a recursive ancient, sacrificing his ability to become one with the Earth in return for the antlers of the original Bunny.

The Jackalope can sometimes be found on dewey Wednesday mornings having stayed up all night or muggy Thursday evenings having slept through the day, wherein they have been known to have been “yawny [sic]”[5] and saying things like, “Yo supbruh,” and “Tay Kitt-yeezie” and occasionally, “Ah, mang! Tsk,” or “Cheeeeeeel!”. Monsterologists have yet to decipher these odd phrases.

Mysteriously, they have been known to respond positively to the seemingly random composition of words: “what’s fly, dog?”[6]

The Jackalope inhabits temperate, marsh and wetland regions of Godville. They prefer a warm squishy climate and are therefore aboveground bunnies, preferring to make their homes out of reach of floods and amphibious predators.

Jackalopes are excellent climbers and have been known to brawl with Scared Crows and Steel Rats over abandoned tree-houses, billboards, radio towers and the like.

Jackalopes live in large communities, or warrens, so tight-knit one seems to run out of things to say to one’s companions and yet a neighbor never before seen could randomly show up and ask to borrow a cup of sugar. 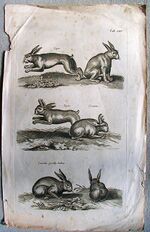 The wild Jackalope has a peculiar mating cycle. When the male Jackalopes reach maturity and for each subsequent annual mating cycle, they’ll grow antlers. This is typical of any antlered monster.

What’s unusual is that the Jackalopes are, upon shedding their antler skins, then seized with the compulsion to seize some sort of vehicle and take a joyride during a thunderstorm. Any vehicle will do, though Vicious cycles and Hardly Davidsone Self-Propelled Bi-Cycles seem to be the preferred wheels of choice.[7]

It’s as yet unknown what benefit this affords the male Jackalopes, as the females, not having had to grow antlers or go on joyrides, seem more concerned with chewing on marsh plants and gossipping about the latest page in What Heroine magazine they managed to snag from the trader’s dusty tome rack.[8]

The Jackalope and You

Some sort of glyph marking an area heavily trafficked by Jackalopes.

Jackalopes are essential to the Godvillian ecosystem, falling prey to such monsters as Firefoxes, Hyper Lynxes, Biowolves, Sun Dogs, Solar Bears, Ticking Crocodiles, Lightsaber-Toothed Tigers, Thesaurus Rexes, Dandy Lions, and etc. Pretty much every apex predator in Godville is after the Jackalope, as a matter of fact. Even owls. Maybe even especially owls.

Heck, in a pinch, a Jackalope’s good eatin’. The pinch in question being a pinch of parsley, perhaps, or thyme? Maybe rosemary… Anyway.

The answer to the question of whether or not the Jackalope is a tameable monster is still unknown. The creature seems, according to limited study, alternately too lazy and judgmental to submit to being tamed, but it may be these very qualities that could be put to use by a relatively cunning hero.

Those wishing to capture a Jackalope for whatever reason are advised to wear stovepipes on their ankles and to carry an ample supply of single-malt whiskey, the Jackalope’s beverage of choice.