Difference between revisions of "Itch King" 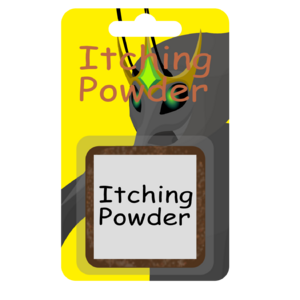 Also, the fact that he crowned himself king can tell someone how much of an ego the Itch King has. In fact, the Itch King thinks that, because he is a king, that means he is a boss monster. In reality, he is not. He's just a mutated lich who crowned himself king (probably because he noticed he was wearing a crown on his head). So, he has a tendency to bring a portable record-player that plays a special "battle music" that he made for himself. This can be advantageous for him, since the boss music he made is actually pretty good (despite having pretty horrible-sounding instruments) and it may distract the hero. However, it can also motivate a hero to beat him to the ground, but that doesn't stop him from playing the song on loop. Many gods speculate that this behavior comes from the fact that many heroes have their own theme song, and he seems to retain some of the behaviors heroes have. One way to end a fight against him is to break his record player (This makes him pretty angry and he may throw five-packets worth of itching powder at his opponent or beat them with his backscratcher, but he will eventually leave, storming off with his broken record player.) As a warning, play along with his belief that he is a boss monster. If a hero tell him that he is not one, he will kill them instead of just making them itch.