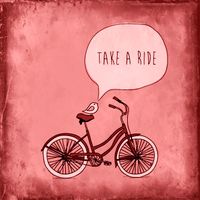 An Invite to hell is a rare artifact most commonly found by heroes on accident, as they are usually not cool enough to be formally invited on purpose. The invitations aren't actually for entering Hell proper, but that of an elaborate party held by hipsters in the deepest and darkest pit of the abyss.

Inside the invitation is a list of "appropriate" attire to wear to the event, such as handlebar mustaches, trucker hats, vintage-style shirts with ironic slogans and thrift store shoes. A note also includes that although these guidelines are suggested "in order to establish a peaceful and creative environment" that anyone not adhering to the dress code will likely be engaged in a violent debate about capitalism and feminism for all of eternity.

The only way in which to redeem the Invite to hell is to have it in your pocket and begin riding a bicycle to hell. The directions in the invitation are constantly changing, and if a hero were to follow the path given they'd surely end up dying, therefor sending their spirit to the party. It is highly recommended that a hero sell the artifact as quickly as possible, as it has been known to attract organic farmers and baristas by the dozen who will murder for a chance to attend the party themselves.