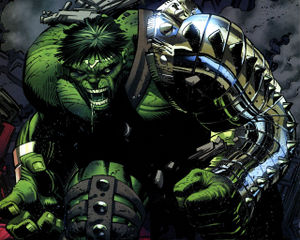 Inevitably, after an initial period of success and from his point of view, even fun, the novelty wore off as for Hulks, as indeed for anyone else, you can have enough Heroes and as far as he is concerned, he has had more than his share already. This gives an added edge to his attacks and this is added to by the fact that the only relief from this not-so-merry-go-round comes if he actually kills one. When this happens, the Time Loop slows down for a while, allowinf him to sneak back to town, chill our and drink Beer, of which he has become very fond.