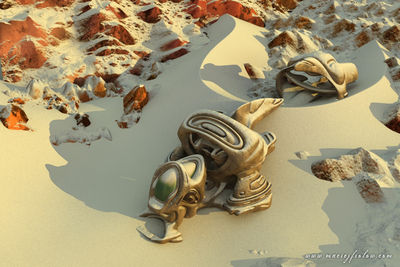 The infinite improbability drive allows you to be at every conceivable point in the universe you simply enter the coordinates of your destination and appear at your destination. The side effects of doing this are that highly improbable events occur such as (usually) temporary changes to the environment and the calling into being of large marine mammals or vibrantly coloured root vegetables.

Wreckage from the Starship Titanic, a spaceship which crashed in sector ZZ9 plural Z Alpha, sometimes rains down to Earth, including pieces of the improbability drive. The cruise ship Starship Titanic was the first to be fitted with the improbability drive. It was incredibly well built and the travel brochure claimed that it was virtually impossible to crash. Unfortunately they failed to realise that anything that was virtually impossible must be finitely improbable and therefore very likely to happen almost immediately.

There are many possible outcomes of activating a Improbability drive.[N 1]