Heading back to Godville the hero EliasTheTyrant decided to stop by a tavern nearby as it was getting dark. The hero had killed quite a few monsters and sold his huge stack of loot. Elias had so much gold that he bought multiple rounds for everyone at the tavern. Elias was completely wasted, he tried to start a fight with the bartender that led him too get kicked out of the tavern. Soon Elias started to walk aimlessly until Elias found himself in a forest. Elias fell down drunk looking at the moon about to pass out, but before he feel asleep he heard a pack of wolves howling at the moon. As soon as Elias woke up he ran as fast as he could too Godville. Elias did not stop running until he reached the guild registration desk and applied for the guild "Howling Moon". Elias wishes too keep hearing the wolf's howl and hopes to help others hear it too. 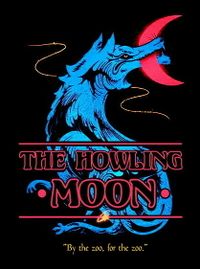 1. The God "Found Alt-self" and his hero "I Am Found". This man is the second member of the Howling Moon. He kept trying to recruit people when I deiced too stop playing for a little bit. For help trying too keep this guild afloat, He earns a place in the Hall of Fame.

2. The second memeber too get into the hall of fame would be the goddess "Twifight Sparkill" and her hero "High Zealot Navieka". This women is the third member to join this guild. She brings a whole new life too our little party and is a great graphic designer and with her permission we will use her work for the new logo. For this she earns a spot in the Hall of Fame.