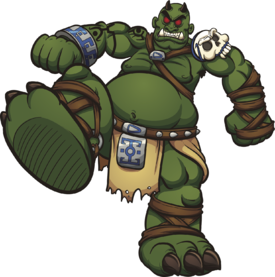 Hired Goons are large humanoid monsters, have greenish skin, a brutish stature and often wear leather armor. They live around larger towns within dark alleys. There is not much known about them, except for the most obvious facts. Hired Goons live together in groups that are called "gangs". These gangs consist of up to 7 members and like to attack passing merchants, stealing all of their valubles. Heroes that have fought them and survived a battle with a whole gang, have reported that they communicate in broken human language. Ever wondered why they are called Hired Goons? Modern myths tell that they all get hired by The Boss. No one knows who that is or why he is doing what he is doing.