Difference between revisions of "Heel grip" 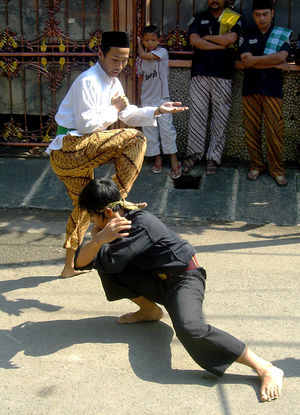 The heel grip is an ancient martial arts technique used to deliver a devastating attack that is as much spiritual as physical. To execute the heel grip, a hero or heroine thrusts his/her inside foot behind the inside foot of her opponent, then withdraws it quickly, while concentrating his/her chi (roughly translated, "energy") in his/her heel, thus transmitting a powerful blow through heel-to-heel, or, more commonly, ankle-to-ankle, contact. If performed correctly, this difficult maneuver will, at minimum, trip the opponent and knock him onto their keister. However, a well-aimed heel grip creates an impact of the hero or heroine's chi upon the chi of her opponent so jarring that the opponent's chi is partially shattered, with the portion corresponding to the foot breaking loose, whereupon the hero(ine) is able to absorb it to her own chi, thus strengthening him/herself while weakening the opponent.

The hero(ine) knocks the enemy on his a#&, while shaking loose a few crumbs of chi, which might be absorbed by the hero(ine), but more likely will be picked up by scavenging birds.

The hero(ine) breaks off a solid chunk of chi, suitable for mounting, or, in some cases, pet food.

The hero(ine) breaks off enough of the enemy's chi to stun him temporarily, allowing her to deliver a further blow or to take additional time to contemplate her next move.

The hero(ine) tears off a honking big piece of chi, then slaps the opponent around with it, while mocking their mother's ancestry and implying that she harbors lewd proclivities.