The Gummy Wyrm (Python gumminosus) is a tamable monster that was at first a regular gummy at the dawn of time.

The Gummy Wyrm turned into a mutant when heroes left some gummies at a plant where radioactive plastic was being made. Thus was the Gummy Wyrm made. Soon, their population multiplied until it threatened the hero population. Heroes labelled this creature as dangerous and have organized huge hunting sprees over the years. Gummy Wyrm is believed to be the cause of extinction for dinosaurs and dodos. It's known for getting support when it is next to a gummy factory. Its reproduction rate is extremely high, but it is not seen often because it was forced into hiding. However, it still threatens the whole animal kingdom and is responsible for the near extinction of several animals. 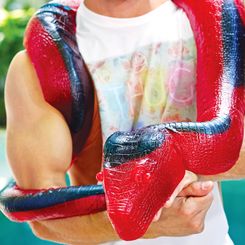 The Gummy Wyrm measures only a few inches when young, but can grow to over fifteen feet in in length. It is genetically similar to the other great wyrms of Godville, including them, um, well, we're not supposed to talk about them. What is known, is that wyrms are wingless, legless dragons more commonly known as serpents. They generally have bad attitudes, aren't much fun to be around, and spend way too much time promoting the apple industry.