On that guild page, there is a list of all the guild members ranked in order of guild rank as well as other statistics and a link to the guild's Godwiki article, a list of which can be found in the Guilds category.

Guilds with only a single member do not have a guild page, instead a message saying they are not well known and a link to their Godwiki article. 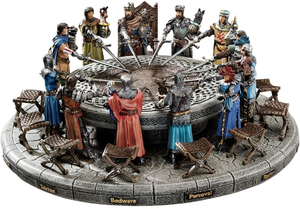 You can only join a guild after your hero or heroine reaches level 12. To join a guild, send a Voice of god message in this format: join the "<Guild Name>" guild (this works best when your hero is idle outside of town; do not cancel your current quest first).

If successful, the hero will embark on a special quest to join the chosen guild but choose wisely because the quest usually takes several days. Your hero will not return to their previous quest after completing the special quest.

To create a currently non-existent guild, use the command Create "<Guild Name>" guild. This separate command for creating a guild avoids the creation of duplicate guilds that usually result from misspellings. From time to time, heroes will be given a quest to join another guild.

While a member of a guild, a hero receives many benefits which include:

Despite the fact that smaller guilds have smaller benefits, heroes prefer them to larger guilds.

As long as a guild has more than five members, a hero will consider joining it, but it is believed that they are more likely to accept a quest to join a guild with lower popularity than a guild with higher popularity, perhaps because they feel sorry for them or because heroes just don't like being popular.

It is known that the higher a hero's guild ranks on the pantheon of unity, the more likely a hero is to accept a quest to change guilds, possibly out of a desire for a quieter place to stay or because heroes just don't like being so close to each other.

Guilds have special internal ranking systems within and benefits increase with rank. When a hero first joins a guild, they start at the bottom and increase in rank over time. A hero who leaves a guild and rejoins later will have to start from the bottom, so loyalty is recommended.

Attaining the rank of grand master (although it isn't the topmost one) means that the hero will not try to leave the guild (by randomly starting a guild joining quest). However, if a god does not check on their hero for over 30 days[4], they will leave the guild regardless of their current rank.