Difference between revisions of "Guild Name"

Guild Name is the name of a guild.

After many requests from members and non-members alike for Guild Name-themed merchandise, Guild Name has opened its Shop Name. All royalties from sales will go towards rewarding members for their contributions to the guild.

Have you ever looked at the guild list and wondered "Which guild should I join?"

We like to think that we are the default guild in Godville, as every time we ask someone how to join a guild, they answer join "Guild Name" guild.

If you pride yourself in genericness, or enjoy the quality of being meta, simply tell your hero

and start your quest for mediocrity!

How does Guild Name guild help me? 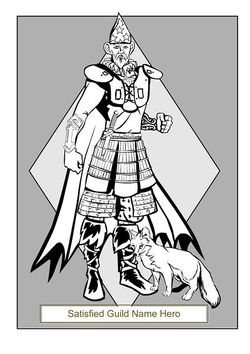 Guild Name gives you an abundance of benefits:

How do I help Guild Name guild?

As a new member to Guild Name, you may wonder what you can do to help the guild. According to Guilds, the best way to help us is to encourage or punish your character when your character is in a town. This will increase our guild's influence in the town, helping to spread our desire to be average to the rest of the Godville universe.

Don't forget!-the act of influencing in towns is not only an altruistic one-after you have influenced a bit, you will start to get free bold and activatable items when you get to the towns you influenced in. Thus you can help yourself by helping us as well!

Also, if you notice your character trying to join a different guild, you can always cancel it and stay with us, as it's almost guaranteed any other guild won't be as average as ours. Just send the command "cancel quest" to your hero or heroine until he or she listens.

To increase our visibility, you can also put a reference to *Guild Name* guild in your motto if you want, but please feel free not to as well-Guild Name appreciates individuality.

Feel free to add any of our guild members or founders as friends, and we will be moderately happy to answer any questions we can. It also helps to increase guild unity (not Unity) if members befriend other members.

The members of Guild Name feel that the following rules could be followed if you want, but don't stress.

Guild Name is not really a guild that holds value in ranks as differentiating value of members. However, we would like to acknowledge our members who have been with us long enough to make Cardinal rank, as we feel it is an achievement worth recognition.

It has been noted in the forum that occasionally Guild Name members will be granted "Guild Points" by one of the founders. Guild Points are like those tickets you get from prize machines in that eventually huge numbers of them will be able to be turned in for mostly worthless prizes. In the meantime, Guild Points are tracked here so that those who are collecting them receive the moderate quantity of fame and subdued admiration that they deserve.

On Day 409 g.e., Guild Name had the closest thing to a constitutional crisis, as it was noticed that one person with Guild Points is no longer in Guild Name. We determined quickly and with utmost agility that it is actually totally fine for people who are not in Guild Name to get Guild points, we just have to restrict the rules a bit. As such, anyone in Godville can receive Guild Name guild points, but is not eligible under rules 1 and 7, because that would just be silly. We have added a Guild column to the table. It must be noted that prizes for Guild Points are also available for non Guild Name members, but they will be Guild Name themed.

Crisis averted, and in a Guild Name-consistent manner!

Things that can earn guild points:

The Founding Era or the Climb to Irrelevance

The legends say that Guild Name was formed at lunch. It was actually formed in the 10 minutes after lunch, as the founders headed back to their "offices" to do "work". This date is generally placed around day 340 g.e. It then took another day before the guild founders' heroes finished their quests, making the founding date day 341 g.e.

However, using archaeological evidence and extrapolated data based on guild growth rates between day 359 g.e. and day 361 g.e. and assuming a linear regression, the number of members on day 341 g.e. would be -101.35, making the guild founding date day 346 g.e. based on a growth of 0.8187 members per hour.

Archaelogical evidence is necessary based on the numbers, because numbers never lie. Are the fallible memories of the founders really more reliable?

There are legends of members who joined before day 346 g.e., such as anyone who has a guild rank that would require more days. This evidence is being considered, but as it conflicts with the very complicated mathematical simulation of the linear regression, either foul play or divine intervention is assumed.

This period, from founding day (whenever that was) until day 362 g.e., is known as the "Climb to Irrelevance".

Then came "the Dip", the era where Godville's Unity calculation decided we were too large and started to cut members it did not consider appropriate. From these 321 members, Holy Random culled 75 members, bringing us down to our second low point on day 372 g.e., approximately 246 members. As of this point, Holy Random considered Guild Name's sacrifice to be enough, and began to grant us new members. On day 374 g.e., we were up to 256, suggesting the next age dawned then.

The Age of Uncertainty

This age came to be known as the "Age of Uncertainty", as over this period, Guild Name's Unity and number of members rose very quickly again, but then fluctuated slightly up and down (between two and three percent) every day.

This age has the distinction of being when Guild Name started to gain a foothold in the towns. The townspeople sensed these relative newcomers as non-threatening, and unlike most political figures, the Guild Name members did not promise the world, but they did pay their bills on time, they never talked at the theater, and they never were that jerk who left the pub early leaving friends to pay for all the drinks. However, the "Age of Uncertainty" included the fact that the town influence shifted almost daily as well.

This age also included the period where Guild Name dubbed its first chief masters, a title unbecoming of Guild Name's core democratic values. The paperwork has been prepared to make everyone chief masters, but we're just not sure to whom we should send it.

Guild Name had become a mainstay in the ranks of Godville guilds. The guild showed a consistent improvement in town influence, even making it to number 5 on the List of Guild Influences for a short time (due to a glitch in the influence calculation), but settling around place 6 consistently. Guild Name became more and more respected among other guilds, as the guild concept was non-threatening and the guild members spread the joy of being middle-of-the-road throughout the lands. Other guilds began to adapt some of Guild Name's ideas, and the guild became accepted as a Godville mainstay. This age was dubbed "the Concrete Age", due to its steadiness, stability, heavy weight, grey color, and relative affordability.

During "the Concrete Age", Guild Name dubbed its first Advisors, suggesting achieving new ranks to be a convenient way to signify beginnings of new ages in the future. "The Concrete Age" thus began on day 401 g.e. Guild Name still feels slightly uncomfortable about such differentiating and classification as ranks being ascribed to its members, as it just seems a lot of work, but doesn't really feel strongly enough to complain too openly.

Guild Name also was written about in Godville Times twice in the Concrete Age:

From this, it can be inferred that Guild Name is into writing letters, does not have a negative view of authority, is inclusive, and tends to be active on weekends. It is also of note that by day 412 g.e. in the Godville universe, writing letters is so uncommon as to evoke enough emotion to not only make a tapestry, but also have this tapestry considered epic enough to be categorized "breaking news".

The Era of Participation

Guild Name had established itself as one of the six most influential guilds in Godville, and this without trying to fight any wars or make any enemies. The fourth age began around day 431 g.e., when Guild Name's first few members became Chief Masters. This era was signified by the printing of the first official Guild Name t-shirt, viewable in our gallery below. The recipient,

Egotrip  , will forever be known as the first person to actually get something out of Godville in real life. The era was also signified by

Shmoozo  's Alpenhörner, the 1000th post on the forum thread (also by

Shmoozo  ), and the implementation of the Eye of the Beholder. It was known as the Era of Participation due to the large number of participatory events that occurred during this period, and due to the members' superlative ability to participate with the best of them.

During the Era of Participation, a Guild Name member,

Zulkar  , became our first member to participate in the front page of Godville Times on day 443 g.e.:

We are especially proud of her perfectly adequate motto, as well as her progress as a gladiator!

Another participatory event in the Era of Participation was Guild Name's first father/son members to participate,

The Aged of Cheese

As the dawning of a new era approached, the liking of cheese and the totally unrelated event of the Cheesemonster shedding his secret identity created a sort of dilemma-the Guild Name members knew that they must come up with new criteria for the changing of an age soon, as founders' ranks would soon change very rarely as they grew high enough. To test this out, the last three weeks of the Era of Participation were dubbed "The Aged of Cheese". During this time, Guild Name went a bit cheese-crazy, signs of which still litter the Guild Points table.

Important events in the Aged of Cheese include:

Day 476 g.e. was the day that the Guild Name founders as well as compatriots

So-what   became cardinals, lending a sense of legitimacy to this crazy experiment and bringing a new era to the galaxy...

The Age of the Telling of Stories

Guild Name founders had become mainstays on the Storytellers pantheon, leading to the suggestion of the new era being themed on this.

This age was marked by the following events: 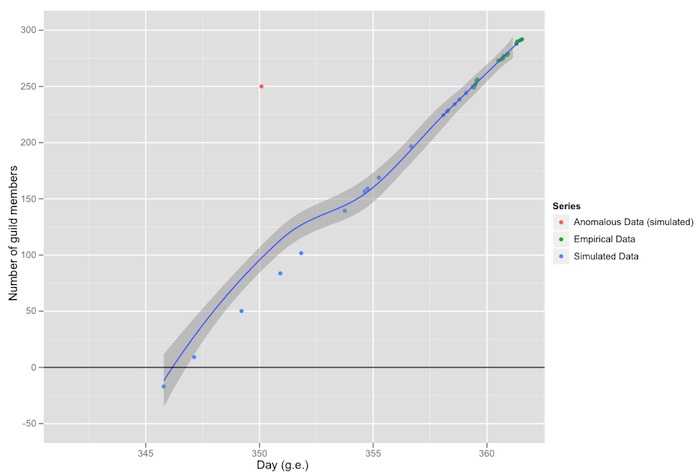 According to this graph and science, in 6 years we will have over 40,000 members.

The Guild Name Guild Gallery is a place where member submitted photos of the gods or heroes can be displayed for the moderate enjoyment of all. It shows that both the gods and heroes have a wide range of interests outside of simple monster slaying and forum posting. Guild images such as crest versions, guild points, failed T-Shirt prints, and other miscellany will also be displayed here for posterity.