(Suitably epic image goes here, if anyone has one)

This is the page opened by the "elections" link on the guild page. What appears depends on whether whether an election is underway, and otherwise whether the member is the leader or not. 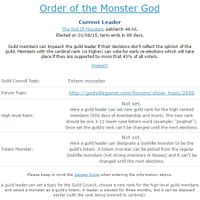 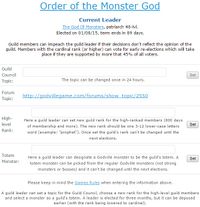 If a guild is not eligible to set a High-level Rank or a Totem Monster, the guild leader sees the same message for these settings as a guild member. [2]

(It may only be necessary to have once (or recently?) been in the top 20 for Popularity. A guild that was in the top 20 dropped out of the top 20 but the High-level Rank option was still available.)

Feature is limited to the top 20 guilds in the Pantheon of Duelery.

Guild members can impeach the guild leader if their decisions don't reflect the opinion of the guild. Members with the cardinal rank (or higher) can vote for early re-elections which will take place if they are supported by more than 45% of all voters.