From GodWiki
Revision as of 14:17, 19 February 2019 by WardPhoenix (talk | contribs)
(diff) ← Older revision | Latest revision (diff) | Newer revision → (diff)
Jump to: navigation, search
Back to the Top
To the Bottom 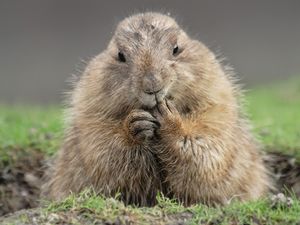 A grounded hog laughs at a hero. 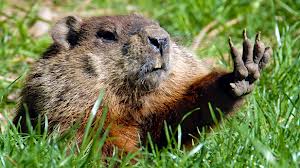 A grounded hog tells a hero to stop, back away, and listen. 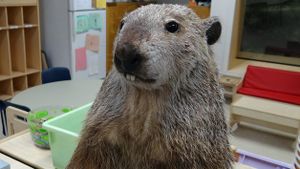 A grounded hog waits for their hero to get stitched up at the physician.

The Grounded Hog (Marmota fundati) is a tameable monster that is the second-cousin twice removed and then put back again to the more commonly known woodchuck. However, they don't like any references to chucking wood and if stopped to ask how much wood their almost second-cousins chuck in a given day if they felt so inclined to chuck said wood, the grounded hog would tuck itself into the fetal position and immediately fall asleep out of boredom. The grounded hog would then hope that you will assume they died of said boredom before you even finished your question.

The grounded hog, much like its totally unrelated animal kingdom friend (your hero), will be sure to eat and drink at every opportunity - in order to store fat reserves for later. The grounded hog prefers to hibernate, so finding one when not in combat is actually very rare. They are easiest to find when it's the second Tuesday of the third month on a leap year, in a garden with the grass being exactly the height of an African swallow (but no taller than a large herring), and with various shrubbery consisting of the perfect mix of at least fifty shades of green, such as that depicted in the garden photo at the top of this page - credit

Your hero need only have a really nice looking, fully encumbered appearance (fully packed backpack) with the words "I am friendly and come bearing hugs!" painted onto it. Each letter of this message must be carefully painted in descending order of the rainbow. Your hero shalt then count to three. No more. No less. Three shalt be the number thou shalt count, and the number of the counting shall be three. Four shalt thou not count, nor either count thou two, excepting that thou then proceed to three. Five is right out. Once the number three, being the third number, be reached, then, the grounded hog will come out having felt sorry for your hero enough so that it feels compelled to travel with him or her for awhile, or that it has decided at least that for the time being at least, it has nothing better to do. Any deviation from this procedure will result in the grounded hog burrowing in order to hide, waiting to come back out until your hero is miles away. Therefore, it is far more likely that your hero or heroine found this particular pet companion whilst hiding from a noise that they assumed was a monster, but of course they would never dare record THAT in their diary.

The grounded hog will eat their way through the trees, bushes, and grass much like a Tasmanian devil - only to try to make its way to the next stream in order to sleep all of that hard work off. The grounded hog will likely try to waddle away during its first opportunity to do so while the hero sleeps, unless it feels it has to take care of the hero much like it would one of its newborns in which case it will let your hero be in its glorious presence several months before trying to see if you can make it on your own without it.

Grounded Hogs will begin to float away like a balloon once they have eaten too much, with heavier ones going higher than hogs who have only eaten until they are full. They can also climb trees, wade through mud, walk tight ropes, delete spam emails before responding, make cute little foot-print cards perfect for any special occasion, and are gold medal winning Olympic swimmers.

Grounded Hogs enjoy random conversations in which they do not have to respond or contribute, shows only available on reruns and repeats, whistling, archeological dig sites, making fun of their woodchuck cousins, burrowing tunnels, mazes, and hiding from shadows. Grounded Hog Day is celebrated across Godville every February 31st.