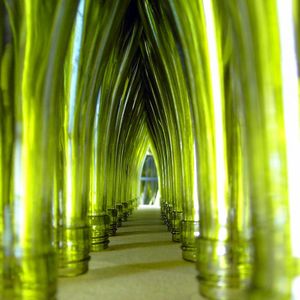 Founded in the 814 B.C. by the Phoenicians, almost simultaneously with the founding of Carthage, the 'Green Bottle's Cult' is one of the oldest cults in the world. This infamous cult has been whispered about in bars and taverns 'cross the globe, and more recently in spaceport watering holes as far away as the Pleiads. Held in the highest regard by drunkards and connoisseurs of humanity, the Cult consists of members who adhere to the somewhat obvious standard of only drinking beverages shipped in a green bottle. Luckily for adherents of this notorious cult, there are many varieties of drinks sold in green bottles, including good scotch whisky, absinthe, wine, and beer. Sadly, (and perhaps purposefully with a bit of spite) the water bottling companies have neglected to package water in green bottles, and would have left the cult's followers condemned to rehydrate with Perrier. It was this very cruelty that led to the demise of the Cult's founder and first Guild Master, Alastair Beardach, who chose to subsist on scotch alone, defying conventional thought and ultimately paying the price. (Literally, leaving his entire fortune to the distilleries of the Highlands, that his cause might continue for generations.) The second Guild Master, Harold Greenly, promptly amended the Cult's constitution allowing for used green bottles to be filled at streams, wells, taps, and replicators.

The modern iteration of this cult has added a few more practical goals to its basic constitution, including:

1. If a member has the time, work to slowly take over the world on the GB Cult's behalf.

2. Travel to John O'Groats in Scotland and place your one of a kind green bottle on the Great Wall of Green Bottles.

3. Once a year, on St. Swithun's day (July 15th), you must eat Tiramisu to prevent it from raining.

4. Wear a kilt all of the time. ALL OF THE TIME. Some exceptions exist, like if you find a really cool pair of trousers.